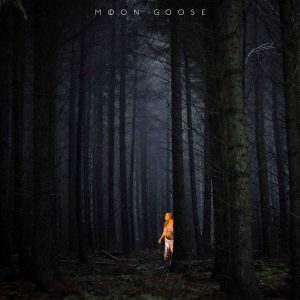 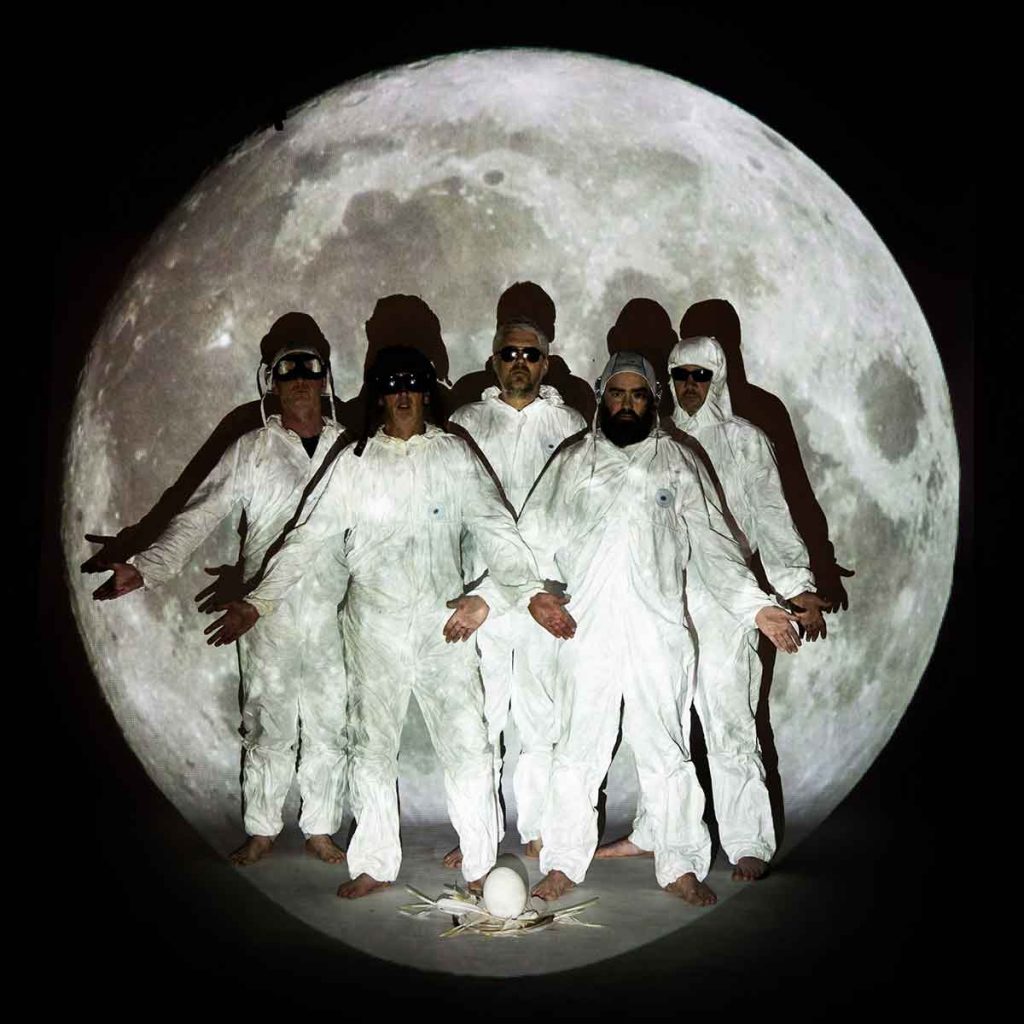 It’s really interesting to check the ‘intro/id’ on Moon Goose’s Bandcamp page: “Duchamp put a toilet in an art gallery. Moon goose put music in a bag and shook it around until it was in bits, poured the bits out, and set fire to them. It’s the sound of a dragon colliding with an asteroid. If you enjoy things like gneiss, rare cheese, and strange ideas followed through to an illogical conclusion, you’ll love Moon goose”…

Yes, this is not a normal band! And I like it a lot! You see, sometimes it’s so good Not to be normal. For your further knowledge and to get inside Moon Goose’s climate, I quote the letter that came along with a CD version of the album for “review” purposes:

Hay-on-Wye, September 2020: Area band Moon Goose has only gone and squeezed out, between the cracks of lockdown, another musical collection. The Wax Monster Lives Behind The First Row Of Trees (TWMLBTFROT) occupies a liminal space between EP and album, comprising five full tracks and four micro-tracks which are short enough to be used for TikTok videos.

Full of secret communications, the record is best understood as a piece of bricolage held together by a childhood ghost, manifesting in such diverse places as a Vietnamese Banknote and an imaginary cave on the Iowa border.

The music can be enjoyed quite loud, fairly late in the day, accompanied by a human sundae machine if available, on board a fungal transport if possible”…

In 2019 (April, 30) Moon Goose released their debut double LP “Source Code” on the Fruits de Mer Records label and I was ending my review of that fantastic album like this “… if you’re into some weird sonic space-rock soundscapes then all you have to do is to follow Moon Goose on their Source Code lunar adventure! Genius!”… That LP was released under the “Strange Fish” series of FdM Records, but this one is co-released with the band under the “Friends Of The Fish” series and it comes on a limited run of 300 orange vinyl copies including a live CD (taken from Moon Goose’s set at the 17th Dream of Dr. Sardonicus Festival in Cardigan in 2019).

With “The Wax Monster Lives Behind The First Row Of Trees”, Moon Goose are taking a step further. Hmmm, maybe more than one step. They took the British sharp n’ heavy Neo-Space Rock of their previous release and they managed to mingle it with enormous amounts of Kozmique Energy. It seems they have found a mine up there in the Moon that supplies them with those gemstones that they’re dressing their music with… The album contains 9 tracks. The 4 of them: “Sibley Iowa” (0:30), “The Blood Plant” (0:42), “The Maquoketa Caves” (0:26), and “Hawkeye Point” (0:27) are “micro-tracks” as Mr. Moon Goose call them and at least to my sense all these 4 could be part of 1 united psychedelic track, but this way they just act as mini psych interludes between the ‘normal’ tracks… Works fine with me though… Let’s focus on the 5 ‘normal’ ones… “Shiny Man” is an electronically-distorted flavored tune with a psych-rock beat (whatever that is), extremely flirting with guitar-based Space Rock and a fabulous futuristic kind of sci-fi atmos but after the first 2:30min the track is being transformed into a dark n’ creepy Psychedelic Capsule full of mystery and complex heaviness! Wow! “Edible Druid” has a rather strange beginning but after a while, a heavy groovy monstrous Psych melodic Beat is revealed and exposures a great Spacey-Psychy-Rock anthem with a crazy rhythm and a mind-blowing theremin sound! A futuristic Psych Epos with a superb cinematic environment and tons of spacey effects ending in superior heaviness! “Edible Druid” could easily be the main theme of a future Blade Runner sequel, “3049” maybe… “10000 Dongs” has sharp sounding, space-psych atmos and with the combination of a strobe light, it may cause the loss of quite a few brain cells inside your mind. This is a mind-bending Psych-Bubble-Space rocket moving with vortex speed! The next one is a cover of a classic Pebbles song (Vol.8), it is called “It Ain’t True” and is a Faine Jane tune originally released in 1967 as ‘B’ side of the 7-inch single “Love On Candy Apple Day”. Moon Goose’s version launched the track into the stratosphere and makes it a Hawkwind song that hasn’t been recorded yet! Guitars and Keys are creating a supersonic psych spacey roller coaster heading towards the end of our universe with extremely high velocity but succeed to open that huge parachute and stops right off the edge! The album closes with the Sci-Fi fairytale “South Popular Guy”, this is a Feast of Sounds! The author tells his story while at the back the band is creating a tremendous psychedelic musical environment full of complexity, futurism, Kozmique Energy, Sonic Power… Distortically trippy that becomes Trippycally PSYCH! One of the Best Albums of this strange pandemic 2020! TimeLord Michalis