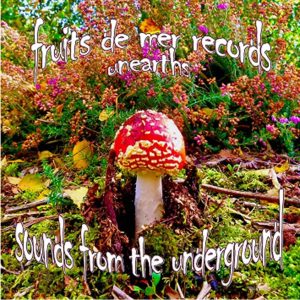 I will start by saying this: If you are not already a Club Member of Fruits de Mer Records, then do it right now by sending an email to Keith (fruitsdemer7@hotmail.com). So, next time you’ll be able to grab – FOR FREE – an exclusive member’s club compilation CD! And believe me, Keith is doing this quite often!!! Of course, you’ll have access to a lot of other “exclusive” stuff by the label…

The press release explains: “The next FdM members club exclusive compilation CD is called ‘Sounds From The Underground’ – it’s free to club members who buy the November vinyl releases from us by Fuchsia, The Superstars and Astralasia and friends, and it’s another rather spiffing collection of tracks by artists that you might or might not already know – some have appeared on FdM releases in the past, some are new to the label and they come from all manner of places, including Eastern Europe, South America, and Birmingham…”

The CD comp contains 9 tracks by 9 different artists from around the globe. Let’s have a look:

YAATRA – Desolacion. An instrumental rock quartet from Argentina carrying many influences, from 70s Hard Rock and Progressive to Psychedelic Rock and Doom! “Desolacion” is taken from their “Arkhan” Digital/Bandcamp release (March 22, 2019), it’s a doomy stonerish heavy instro that flirts with Prog and Post-Rock.

CULTO AL QONDOR – Templos. Taken from the self-titled “Templos” LP, released December 8, 2017. This is a Prog-Psych-Space-Doom-Stoner trio hailing from Lima, Peru, and consisting of members by 2 great Peruvian bands, La Ira de Dios and Serpentina Satelite (having released LP records through Nasoni and World In Sound). “Templos” is a fantastic Heavy Prog Instrumental journey based/built upon that ‘cursed’ “One Of These Days” riff… Mind-blowing!

THE SUGARMAN BAND – Magic Mirror. They’re coming from Moscow, Russia, and “Magic Mirror” is the closing track of their 2019 Digital/Bandcamp release “The Wind Colored Like Laughing Rainbows”. This is trippy neo-psychedelic rock, sung in their native language, flirting with late 60s West Coast Psych…

JAY TAUSIG – Opus Omnia Part One. Vocalist/multi-instrumentalist Jay Tausig is very keen on FdM Records as we meet his name inside many compilations by the label. It is taken from Jay’s Digital/Bandcamp release “Opus Omnia” released on December 13, 2019. It’s a long instrumental track that moves inside Progressive Rock’s wide range, some trippy parts, some dreamy-sax soundscapes, and some Ambient and New Age passages are completing this superb musical puzzle…

ARCADE MESSIAH – Diagnosis (Instrumental Mix). Hailing from Sligo, Ireland, Arcade Messiah is John Bassett’s Neo-Prog vehicle. This is the instrumental mix, the one with vocals appears on the album “The Host”, released September 17, 2020. Everything is written, recorded, and performed by John, of course! Neo-Progressive sound, guitar-based, becoming hard but without losing its melodic parts.

VISION ETERNEL – Moments Of Absence. Already known from their participation in another FdM Records compilation (“Deep Sea Exploration”), Vision Eternel is Alexander Julien, located in Montreal, Quebec. The track is taken from the Digital/Bandcamp release “For Farewell Of Nostalgia”, September 14, 2020. A New Age track emotionally charged that flirts with Shoegaze and mixing Post-Rock with Ambient elements…

STRAY OWLS – Bipolaroid. A Psych trio hailing from Mebane, North Carolina, releasing their psych-related music since 2015. The song is taken from their Digital/Bandcamp release “Stray Owls vs. Time & Space”, May 8, 2020. It’s a GREAT Neo-Psych song drenched into 60s Psychedelia, an AMAZING fuzzy with a jagged edge, stoned, and LSD infused!!!!

Check the Bands for more: