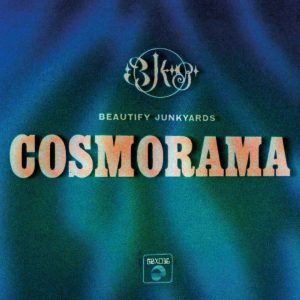 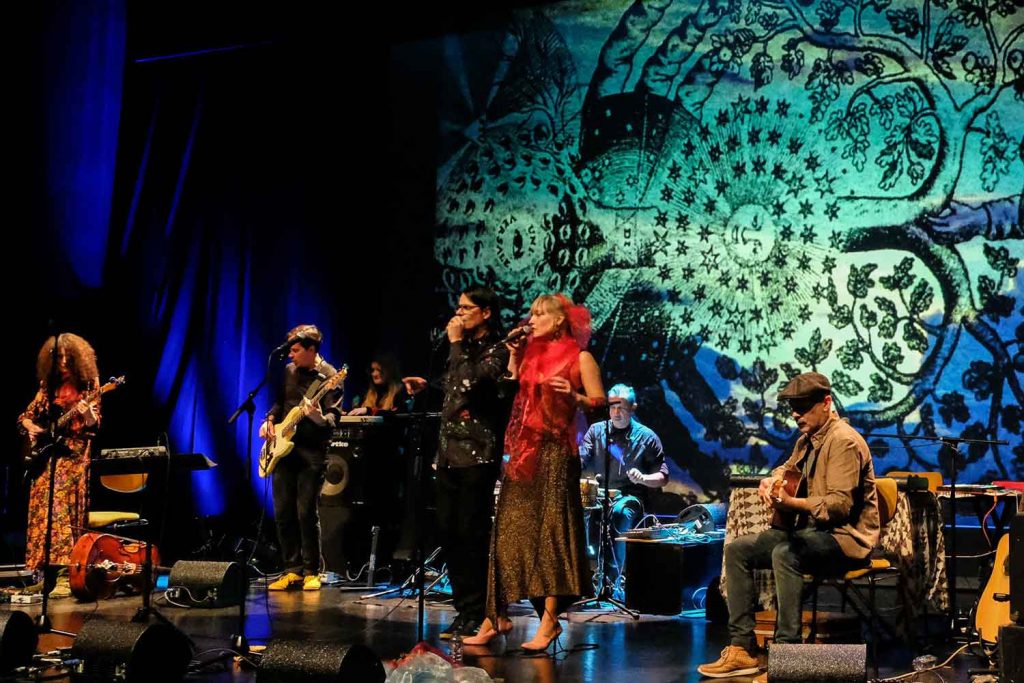 Our beloved Psyche-Folk Portuguese band from Lisbon is here with their 4th album release, spiritually entitled “Cosmorama”. They have released “Beautify Junkyards” in 2013, “The Beast Shouted Love” in 2015, “The Invisible World Of Beautify Junkyards” in 2018 plus a couple of Singles, “From The Morning / Fuga No 2” (Fruits de Mer, 2012) and “Other Voices 8” (Ghost Box, 2016).

The fourth album for the Lisbon-based band and their second on Ghost Box following on from The Invisible World of Beautify Junkyards in 2018. Cosmorama is a beautifully crafted and lavishly produced adventure into tropicalia-tinged psychedelic dream pop. A hallucinogenic fusion of Os Mutantes and Broadcast. The eleven songs here are instantly rewarding and transportive, but the rich production rewards the listener with new detail on every repeated play. Its music that’s knowingly informed by Portuguese and Brazilian vocal traditions, with gauzy layers of male and female voices moving beguilingly amongst each other, shifting, dreamlike, between languages. This is set against an electroacoustic backdrop of complex percussion, masterly acoustic musicianship, and a matrix of haunted electronics that make this album perfectly at home in the world of Ghost Box records.

Beautify Junkyards are a very talented group of multi-instrumentalists headed up by João Branco Kyron on vocals and keyboards, Helena Espvall (formerly of Espers) on cello, flute and electric guitar, João Moreira on acoustic guitar and keyboards, Sergue Ra on bass, and Antonio Watts on drums and percussion. Newest member, Martinez was recruited just in time to contribute vocals on Garden by the Sea.

Joining the band as writing and performing collaborators on Cosmorama are: Nina Miranda (of Smoke City fame) on vocals on the title track and on Reverie and Parangolé, Alison Bryce of NYC’s Lake Ruth on vocals on Deep Green and classical & contemporary harpist Eduardo Raon on A Garden by the Sea and The Fountain”.

“Cosmorama” consists of 11 compositions drenched with Beautify Junkyards’ Psych-o-Tropicalia aura and taking inspirations from bands huge Psychedelic-Folk cosmodrome! The album kicks off with “Dupla Exposição”, a dreamy trippy psych tropicalia atmosphere with soft serene hallocinogenically warm vocals and some out-of-this-world audio-sampling. “Reverie” starts and an amazing kaleidoscopic psych soundscape is unfolding, dressed with beautiful poppy vocals while the distinctive usage of “electronic samples” is literally launching the track. The band’s flirt with electronics becomes on “The Sphinx” a strong Love Affair, and we are witnessing another electronically flavored modern popsike tune. “Parangolé” is a kind of an experimental vocal tune surrounded by a brilliant melodic field of notes, and sounds, and colors… “A Garden By The Sea” is a dreamy but cool tune with a magical ethereal environment while “The Collector” is kind of acoustic with excellent percussion and slices of Tropicalia and Psychedelic Pop, the musical arrangements over here are Superior! “Cosmorama” starts to play and some unknown tropical cosmic magical energy is spreading all over… “Zodiak Klub” is a Caravan Of Sounds, a weird dreamlike poppy tune while “Vali” tries a huge dive into Psych Folkness, serene environment, birds all over, beautiful but full of melancholia. “Deep Green” is trippy Pop Euphoria and lyrics like “… there’s a mocking bird Singing songs in the trees…” come immediately to mind… Eventually, the album closes with “The Fountain”, a fantastic melody, an amazing psych-a-dreamy scenery, becoming trip-hop, flirting with experimental Psych, filled with obscure sounds, transporting the listener to that faraway secret vineyard, simply and patiently waiting there to taste the magical nectar that comes from Beautify Junkyards’ musical crop… Invest… TimeLord Michalis