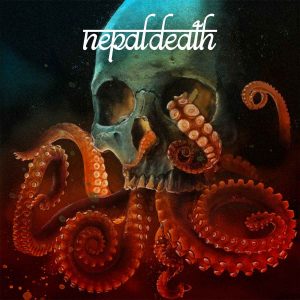 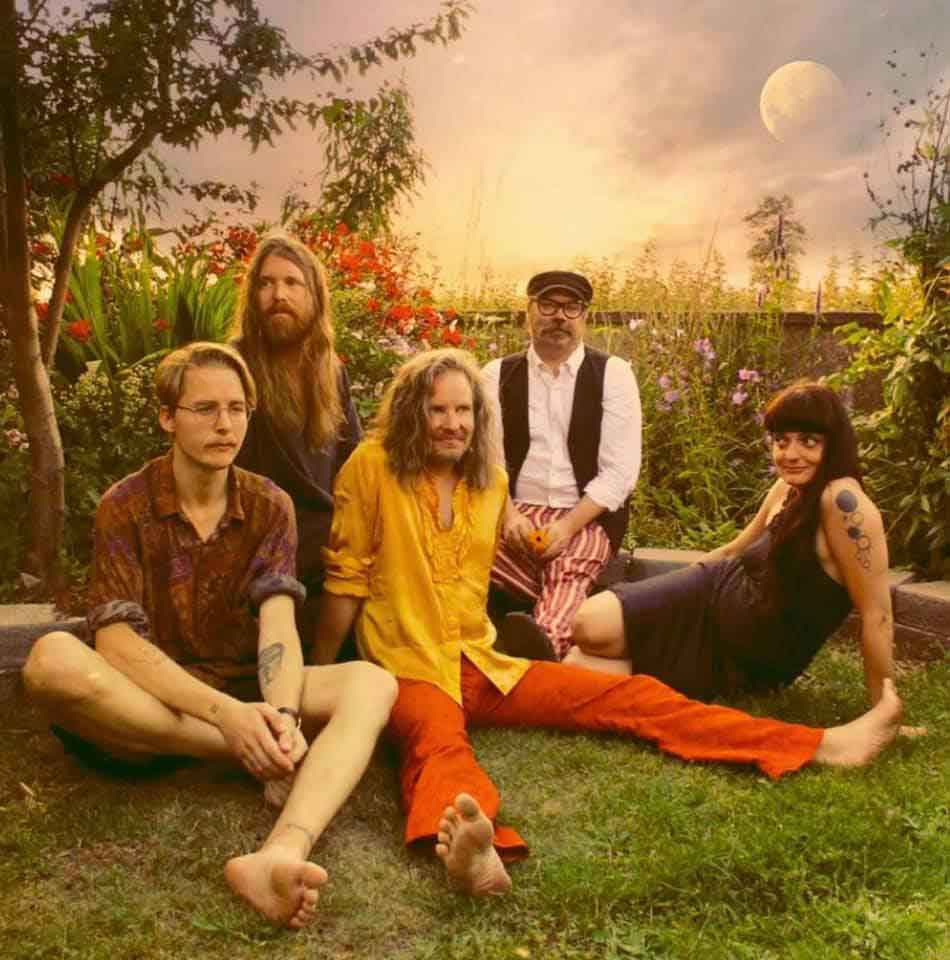 Nepal Death is a kind of a supergroup hailing from Sweden and Kommun2 is releasing their debut album. Take a look at the quite informative press release to get an idea of what is all about:

“Imagine Charles Manson and Anton LaVey teaming up with a band of fake Hare Krishna cult members speeding towards Kathmandu in a rundown VW bus along the dusty Hippie Trail in 1966. That may give you an idea of what the Swedish band Nepal Death is all about.

The lyrics of the nine album hymns form a forbidden traveler’s guide to Hindu witches, love magic, death rituals, and worship of the almighty Kali Ma. They may appear sinister and serious but in the next moment, they are sparkled with twisted dark humor.

This is Eastern tinged heavy psychedelic rock at its very best. Angst-ridden vocals on top of a compact wall of fuzz guitars, heavy bass, and ritualistic drum beats all backed up by Hindi chants, religious bells and flutes, freaky backward sounds, and eerie India tanpura drones.

Nepal Death´s style draws from seventies heavy rock bands such as Hawkwind and Blue Öyster Cult. Psychedelic rock in the vein of Amon Düül II and Uncle Acid and the Deadbeats are other strong influences along with traditional musical vibes from nations like Turkey, Afghanistan, and India. Occult references mixed with Hindi mysticism are also prominent in the band’s lyrics and aesthetics.

The Nepal Death music collective is based in Malmö, Sweden, and features veteran musicians from bands such as Agusa, Jämmerdal, Technicolor Poets, and Texas Motherfuckers. According to anonymous core cult members, the band name is inspired by Danish poet and psychedelic pioneer Eik Skaløe. The former singer of Steppeulvene dreamed and sang about Nepal but went tragically missing in action close to the Nepalese border in 1968. The song Dead in Nepal released on vinyl single in 2020 is all about his demise.

Nepal Death have crafted something of a loose concept album revolving around a fictive journey on the hippie trail to Kathmandu. All songs are blended together by short musical bridges creating the sensation of talking to mystical locals, visiting secret shrines and temples, smoking hash from ornamented water pipes, and writing doubtful poems.

The front cover depicts a demonic incarnation you may encounter when performing the ancient Buddhist Himalayan rituals of ”Chöd” and has been created by artist Toby Jörgensen of Studio Dzyan (the art collective responsible for the groundbreaking artwork for both Mercyful Fate and King Diamond, back in the eighties).

The album is released by Swedish psych/progressive label Kommun2 and features guest appearances from members of bands such as Agusa, Coph Nia, Yuri Gagarin, and Rymdstyrelsen.

This one band is ready to go and meet the universe on stages everywhere! Please step right up and get ready to leave in a haze of smoke and steam on a trip towards a glorious end in Kathmandu, Nepal. Namaste!”…

The Nepal Death collective consists of Anders Hallberg (Vocals), Magnus Könberg (Drums), Johan Luyckx (Electric Guitars), Markus Mannberg (Electric Bass Guitar), Ana Marega (Chants and Theremin), and Tobias Petterson (Electric Guitars). “Nepal Death” consists of 11 songs blended together by short musical bridges, telling the story of a journey on the famous Hippie Trail to Kathmandu! Side ‘A’ kicks off with a 68 seconds acoustic intro entitled “Eik Dei”, chanting-like and full of mystery! “The Hippie Trail” has a tribal kind of environment with strong lyrics and an operatic style of singing, a pompous-psych soundscape… “Sadhu Satan (The Durukti Mantra)” it’s a Heavy Psych Popish Mantra while “Shadow Empress of Kathmandu” is an acidly drenched tune with a kind of acoustic and bucolic sounding, there’s a cool flute somewhere there and the track is desperately seeking for a climax… “She Smelled of Hash” is a modern Psych-Rock anthem, it cannot “replace” a song like “Hassan I Sahba” in our consciousness (hehe…), but it’s a dynamic Psychedelic Sorcerer with a rather Shamanic, trippy Hindu-smelling psychedelic ending… Side ‘B’ starts with the 62 minutes intro of “Hindu Psyche” and continues with “Wytches”, a rhythmic Pop-Psych tune, full of Heaviness and fuzzy riffs. “Om Kali Ma” is a distorted Heavy Psych Mantra, powerful with Hindu (probably) lyrics and hot a la ‘stoned’ riffs… “Tonight Will Die” is another pompous Heavy-a-delic tune with an adventurous guitar ending while “Sita Ram” starts with a Maharishi (probably) speech about the path beyond Life and Death, a short cool and extra trippy Psych Mantra. The last one is called “Dead in Nepal”, the band creates a Psych complex and mentally insane atmos with some heavy guitars under a controlled Heavy environment… “Nepal Death” is quite Heavy for my tastes but I’m sure that it will keep all of you Heavy-Psych Seekers out there, extremely satisfied! TimeLord Michalis

Get the LP from SHINY BEAST Mail order