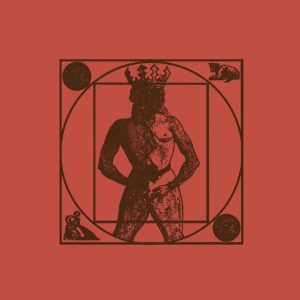 Smote is the solo project of Newcastle-upon-Tyne, UK-based multi-instrumentalist, Daniel Foggin. The independent underground UK record label Weird Beard is releasing it on a very limited run of 250 vinyl copies and the label’s press release says:

“Weird Beard are very happy to announce Smote’s Debut LP “Bodkin”, a solo project from Newcastle upon Tyne-based Daniel Foggin. Following on from two EP’s (also released as part of the short-run Weird Beard Tapes series) and two collaborative cassettes since Smote’s birth in April 2020, Bodkin spans transcendental psych-folk to crushing drone and conjures images of bleak medieval landscapes and cavernous dungeons. Taking heavy influence from both Scandinavian psych-rock and traditional instrumentation, Bodkin represents an escape from modern living and offers the listener a heavy journey into the ether”…

“Bodkin” consists of 5 tracks, from 4 to 12 minutes long, and it kicks off with “Psolstice”, an adventurous heady tune, becoming spacey, krauty, and proggy, getting into a hypnotically trippy mood with a spiritual aspect, a rather mind-bending song that perhaps refers to a Psychedelic Solstice… “Fohrt” is a more laid-back tune, a weird Middle Eastern-inspired psych song with acoustic instrumentation, also quite trippy… “Moninna” develops a rich Psych-Folkie soft soundscape with a rather creepy atmosphere emerging a kind of an isolated bucolic feel… “Motte” dives into a deep psych atmosphere, flutes are blending with strange chants, while the scenery becomes epic and folkie… The album closes with the self-titled “Bodkin”, Daniel moves into a more experimental ground, with a creepy but trippy atmosphere, a rather dark tune that it seems that comes straight out of Mordor… I used to know that Bodkin was this brilliant Scottish quintet that released their remarkable self-titled album in 1972, but from now on, “Bodkin” is ALSO going to be remembered as a real cool 2021 Psych-Folk LP by Smote, an album that patiently waits to be discovered… TimeLord Michalis