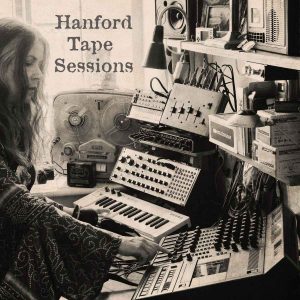 One of the numerous “interesting” bands that came to my attention because of the independent record label Fruits de Mer Records, is this UK duo called Hanford Flyover, led by Josh & Holly. In October 2019, FdM Records released the 4-track 7inch EP “Sunny Spells” and one of the 4 artists was Hanford Flyover, taking part with their cover version on “Just Another Day”. An excerpt from my review reads: “Before reformed as PLEASE they were known as NEON Pearl, they recorded a bunch of excellent melancholic Psych-Pop tunes in 1967 that saw the light of day in 2001! One of those tracks was “Just Another Day”, presented here by Hanford Flyover, a respectful cover that reduces a bit the melancholic vibes of the original, a Fantastic version!”…

The song was also included a year later on the FdM 4CD compilation “A Band For All Seasons – Songs From The Four Seasons Of Love 1966-1969”. So, after all these “sub”-releases, an album release by Hanford Flyover with the help of FdM, came naturally as the next move…

“Hanford Flyover mix flavors of 1970’s psychedelic, progressive, psych-folk, Zen, and Downtempo. Influences include King Crimson, Air, early Pink Floyd, Zero 7, Portishead, Nick Drake, Morcheeba, and The Doors… Our aim is to produce lasting evocative music with depth and soul in this time of soundbites short attention spans and disposable living. A selection of songs recorded during the 2020/21 lockdown, with the help of various 4 track portastudio cassette recorders”… “During the lockdown, Josh rebuilt several old cassette porta-studios and with the help of Holly began recording on them, which, through the limitations of tape recording required keeping things to the raw musical essence in many ways. The resultant tracks are sonically diverse yet bound together by a common theme, reflections of the unusual times we live in…

“This album is like a film that ends very differently than you expected from when you first started watching, yet there remains a connection throughout. A Bit like life I guess”… Cheers Josh & Holly

“Hanford Tape Sessions” consists of 9 tracks and it takes off with “Revolve”, an intense feeling of an 80s Paisley Underground atmosphere over floods the track, though the ‘air’ is filled with a mid-90s Brit Guitar-Pop, Holly’s lovely vocals accompanied with some great a-la New Model Army ‘Psych’ guitar! “Noise” is a beautiful rhythmic cool song with a driving guitar sound, an incredible poppy melody, a tune that comes straight out of the 80s, too… Josh takes the lead vocal singing on “Mr. Whetherman”, a mix of Calexico, Morcheeba, and Love, I dare to say… “Another Sun” starts and under a psychedelic hazy background the duo unfolds a late-night trippy and dreamy but rather experimental soundscape, this is so cool! The next one, “Money In The Kettle”, is a remarkably amazing tune, a song that could easily hit the UK TOP75 Singles chart (if such a chart still exists, hehe…), a Psych Groover where Portishead meets Santana, a fantastically trippy tropicalia-delic and super addictive song! “Today” uses the same blurry n’ trippy-hop atmosphere, the scenery has now become a little more acoustic while a gentle smell of 60s incense is spread all over the place… “Cloverfield” is a cool soft tune, drenched in melancholy, with male/female vocals and a tremendous Santana-like guitar solo filled with Doors-flirting keys! The last 2 tracks are both instrumentals, “Shortwave” is a futuristic Sci-Fi Spacey Sequencer experiment while “Sunrise” closes with an ambient-like soundscape with an intense early 70s Pink Floyd atmos! A satisfying album that only made my appetite for the next one, unquenchable! Go for it… TimeLord Michalis