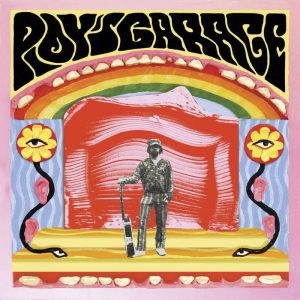 Roy, is an enigmatic persona/figure/artist/band (we’re going to clear out very soon) releasing music through Bandcamp for the last 3-4 years… Through a very close friend of mine – which I call “Bandcamper” I discovered ROY, last year with his concept-LP release “Peace Love And Outer Space” (the album made it to TOP-35 of the Best albums of TimeMaZine for the year 2020), and now, one year later, Roy comes to release ONE of the BEST records of the salvation year 2021, entitled “Roy’s Garage”! “Roy’s Garage” is a testimony, a confirmation, and a piece of evidence, that if you have “knowledge” of the past, if you have “musical-education” then you can achieve many great things in speaking of Creations in music! Maybe I’m wrong, the future will tell… Anyhow, the text on the Bandcamp page, reads:

“On April 17th of 2020, ROY released “Peace, Love and Outer Space”, a conceptual LP based on an alien visitation where the enlightened from beyond come to earth to spread the idea of world peace through disarmament and love for one another. The release was eerily prescient as 10 days later the Pentagon released classified footage of alien aircraft being tracked by navy jets, once again trying to reinforce their agenda that advanced life forms “not of this earth” are a threat to humankind. ROY knows the truth is out there and so should you. We wouldn’t be surprised if “Peace, Love And Outer Space” is on repeat in Dr. Steven Greer’s car rides to ce5 sessions because it is not only prophetic, it is a downright psych jammer.
This spring of 2021 ROY returns, not with stories of alien enlightenment, but with tales of personal vision. We now know the man behind ROY is Patrick Lefler, a psychedelic scholar whose deep musical knowledge is run through a panoply of archaic and homespun devices to create the sound of ROY. Welcome to “Roy’s Garage”, where both wow and flutter rule and all must observe the law of diminishing track widths.
The LP’s side A opens with “In The Garden Defeated”, a sly nod to one of the sixties most renowned singles, and what follows is a succession of 8 quick hits of succinct psych-pop, ranging from the cold fact garage stomp of “Let Me Tell Ya” to the Wilson-esque pocket symphony of “Where Did My Mind Go?” Side B offers a more expansive vision within the ROY universe with its sprawling modal jams filled with free fuzz riffing and cascading acoustic leads, all culminating in the sage advice of a knowing guide in album closer “As Long As You’re Feeling”.
Projecting forth from his mind’s eye, ROY declares he is “not afraid to be a freak” and “it’s time to love myself” and in doing so “Roy’s Garage” acts as his de facto manifesto, seemingly shunning any remaining vestiges of straight society, his fuck the man flag flying high, while his sky brother and sister no doubt peer through time and space smiling”…

“Roy’s Garage” consists of 13 tracks and it kicks off in a let-loose, druggy, and extremely psychedelically flavored way with “In The Garden Defeated”. Just imagine Faine Jade singing with The Fugs while Kim Fowley is producing, and you’ll get a picture of what is going on inside “All The Time”… “Nowhere To Run” is a Psych mysterious tune, tinged with a sad melancholic “Oar” atmosphere (yes, the one that mastermind Alexander ‘Skip’ Spence did back in 1969)… “I’m Not Afraid” is an AMAZING freak-protest-psych anthem of the crazy crazy times we are experiencing, a song that David Peel could have made it a street-hit in Greenwich Village, somewhere in 2021… “Time To Love Myself” starts to spin and it’s getting harder and harder to believe that this is a 2021 recording that you’re listening to! I’m trying hard to convince myself that this is not an acetate from the psychedelic late 1968 by Ian Bruce Douglas and his after-Ultimate Spinach, band!!! There’s more acid-folkie flavored psychedelia on the short “Power Of Three” while “Let Me Tell Ya” is Psychedelic-O-Garage for the future generations… Let’s welcome Syd to our fellowship, “When The Man Wants You To” starts… and The Madcap Laughs… On “Where Did My Mind Go”, Brian Wilson (Good Vibrations era) meets Curt Boettcher (Millenium era)… “Where The Mind Meets The Eye” has a superb Psychedelic KAK atmosphere, pushing the listener to imagine what could have happened if Buckley, Spence, and Holmes (you got it, right?) had formed a group… “Find The Light” is a lonesome Folkie tune by a fellow troubadour and his guitar and his hallucinations too… Is this taken from “Ode To Quetzalcoatl”? Wow! “Universal Truth” is Electric Music for the Mind and Soul that perfectly blends with Electric Ladyland… The album comes to an end with “As Long As You’re Feeling”, an LSD flavored tune, Acid, Psych, and lysergically trippy atmosphere that you can easily lose your mynd… In conclusion, Roy delivered one of the Best albums of the pandemic 2021, an album where all the beautiful Psychedelic 60s are passing by your eyes/ears in just 39 minutes, and here’s my advice to you: Don’t be afraid to free your mind! Your Soul will definitely follow! TimeLord Michalis

ps I will proudly put “Roy’s Garage” vinyl LP next to My Indole Ring’s one… (file under: Canada Psych) 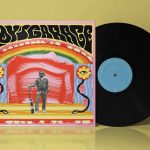 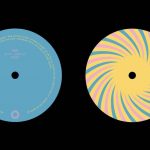 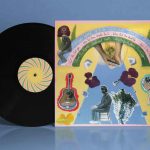 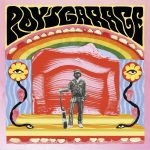