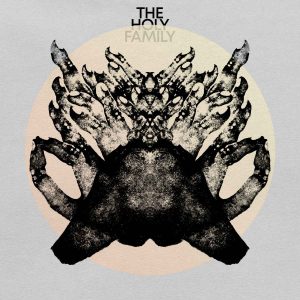 The Holy Family is a new band that consists of members from the bands Guapo and The Stargazer’s Assistant. The band is led by British percussionist David J. Smith helped by Kavus Torabi, Emmett Elvin, Sam Warren, and Michael J York. This is their debut album, and let’s take a look at what is written on their Bandcamp page:

“A surreal odyssey into dimensions unknown, the debut album by The Holy Family has arrived to bewitch and delight.
The scope of ‘The Holy Family’ – an auditory Rorschach test across thirteen tracks rich in adventure and intrigue – is boundless. It’s an intrepid voyage through soundworlds that takes in all manner of incarnations, as This Heat-esque polyrhythms, spidery zeuhl, oceanic kosmische, blissful Robert Wyatt-via-Talk Talk-esque pastoral and even Lalo Schifrin-esque celluloid-score tension are visited here in search of some greater universal truth. Yet all of these stylistic forays are married with relentless dream logic into one unifying kaleidoscopic vision.
“I guess if I had to try to put it into words it’s my attempt at a musical interpretation of a very trippy and psychedelic murder mystery tale, or otherworldly dream/ hallucination” reflects David J. Smith, the chief architect of this particular hall of mirrors. The aesthetic of The Holy Family evolved naturally via first improvisation and then a very meticulous crafting of the raw material. Recording sessions involved Smith and his cohorts – including longtime collaborators Kavus Torabi, Emmett Elvin, Sam Warren and Michael J. York – retreating to “an old house in the country well stocked with the requisite fine wines and jazz cigarettes” to lay down tracks that were then sculpted into their eventual form by Smith and engineer/mixer Antti Uuismaki, for approval and final overdubs from the rest of the collective.
Lyrical and aesthetic inspiration came from both the magical realism of Angela Carter (whose infamous 1991 short film The Holy Family Album also birthed the band name) and the surrealist art of Dorothea Tanning, with Carter’s reimagining of children’s folk tales and the essence of Tanning’s short novel Chasm: A Weekend (written at the age of 94) finding their way into a phantasmagoric journey which dives deep into elemental and hallucinatory headspaces with magic and menace to spare.
Musically nothing was off limits, starting as the multiple narratives of opener ‘I Have Seen The Lion Walking’ reflect the metaphysical trance states of the album’s narrator, and gathering momentum with the eerie cadences of ‘Skulls, The…’ , imagined initially as a fictional theme to a BBC detective show featuring its title character as acid casualty rather than recovering alcoholic. The circuitous and crooked path of this album takes in heat-haze atmospherics, twisted Beefheart/Dr. John-inspired machinations, dark mantras and febrile incantations on its way to a revelatory conclusion.
Mercurial and mystical yet charged with primal energy, this is a classic double album as forum for chimerical experimentation – shifting in form and structure every time it travels from the record racks to the stereo, and revealing yet more psychic landscapes with each listen. Submit to its spell, and join The Holy Family”…

So, is your curiosity arisen yet? All of you, unaware and unsuspecting out there, just wait… wait till you listen to this album. You will not believe what actually hit you! “The Holy Family” contains 13 songs and it takes off with “I Have Seen The Lion Walking”, a non-normal tune, a strong combination of vocals under an amorphous ambient-like musical environment that only makes you anxious and curious for the following… “Skulls The…” starts with a monotone piano chord and spreads mystery to the already sophisticated-somehow atmosphere, the music slowly develops to something that could be an imaginary film score of a long lost movie that Brian Eno could have composed… “Inward Turning Suns” is an ambient-like poppy-tribal-flirting tune with an adventurous bucolic flute sound that transports the listener into a transcendental magical jungle field… The ‘B’ side opens with “Stones To Water”, a mystical but ethereal simultaneously tune, extremely psychedelically flavored with a fantastic Kosmique-Psych environment and a brilliant early 70s Floyd guitar sounding, and while listening I’m desperately waiting to hear someone knocking at the door shouting “one of these days I’m gonna cut you into little pieces…” but instead of that, the band willingly opens a door and let us in another dimension, a parallel reality, dark and cold and creepy… What a Trip! “Desert Night” unfolds an acidly Folkie soundscape, acoustic but scary, you can let yourself be hypnotized by Pan’s magical pipe following him into the… “Wrapped In Dust” starts, and Satyrs, Nymphes and other strange creatures are all dancing into this Ancient tribal rhythm, Pan is supervising and the listener is having an out-of-body experience, a very Pagan-like musical Trip! Side ‘B’ closes with an unbelievable Psych tune called “World You Are Coming To”, a song that flirts with early 70s Prog, mysticism, and Comus! A metaphysical state of trance, psychedelically ecstatic, a nightmarish ritual that leads to salvation, if only you can follow… The third side of the album starts with “Inner Edge Of Outer Mind”, a rather Psychotic tune with a weird blurred industrialized atmos, experimental drumming under a jungle-ish environment, entering a dark Freak-Folk path, ready to meet the mythical Herald… “A New Euphoria” begins with a hypnotic groove and a rather hallucinogenic psychedelic motive while the tune slowly unfolds a trippy acidly drenched folkie weird environment that acts as a dark Mantra-like instro… There’s much brighter scenery on “See Hear Smell Taste”, I dare to say you can feel the warmth of the sun even if it’s still dark and you cannot view its rays. This is a mesmerizing kind of enigmatic improvised experimental tune, deeply multi-layered that ends in a mystical creepy way… Side ‘D’ opens with “St. Anthony’s Fire”, acoustic with ‘clean’ vocals, psychedelically drenched, becoming a mind-blowing lysergic trip, emerging a Universal Love feeling. “Chasm First Part” is a mind-bending Trip to Innerspace, hallucinogenically trippy, an epic Psych Mantra that acts as a sacred ritual thing… Eventually, the journey (album) ends with “Chasm Second Part”, a Psych groover, still mystical, improvisational, you can feel this tribal rhythm flowing in your veins, like a virus… A virus that helps you to Trip/Transport into another dimension… In conclusion, “The Holy Family” is a very difficult and different album. You can describe it as a Genre bender but also it’s true evidence that Freak-Folk managed to exist to this very day… One of the best albums of the year! TimeLord Michalis

Listen/Buy through THE HOLY FAMILY Bandcamp