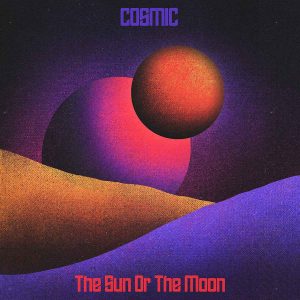 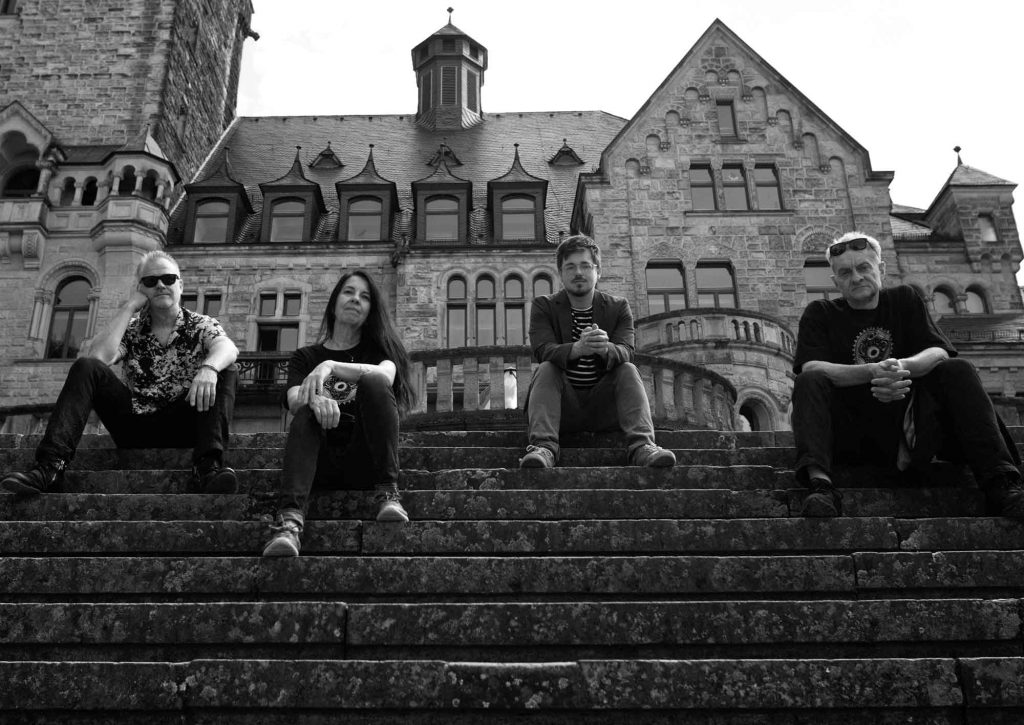 “Cosmic” is the debut album by a new band called The Sun Or The Moon hailing from Germany. Their debut album is released through Tonzonen Records. Here’s some info, taken from the band’s web:

“The Sun or the Moon was formed in the German Rhine-Main area in late summer 2019 by four adventurous and creative musicians. They have come together to realize their sound ideas inspired by 70s Kraut and Psychedelic Rock. The quartet has already released two digital singles on popular streaming portals and is currently working intensively on the completion of their debut album, which will be released in September 2021 as a double vinyl LP on Tonzonen Records.
The four musicians, Frank Incense (vocals, bass, baritone guitar, electric sitar, synthesizers), George Nowak (guitar, theremin, green flute), Susanne Baum (piano and keyboards), and Niclas Ciriacy (drums and percussion) describe their sound as Psychedelic Space Lounge Music. Over an electronic foundation of repetitive machine beats and sound carpets created with modular synthesizers, the band develops hypnotic and yet danceable tracks. Since improvisation is a key element in The Sun or the Moon, no two concerts of the quartet will be alike: Everything between monotonous Kraut, relaxed Psychedelic Ambient and overflowing Acid Rock is possible”…

So, “Cosmic” consists of just 7 tracks, clock-ticking from 7:14 to 18:47 min! The album takes off with the self-titled track “Cosmic”, a hypnotic mesmerizing Hypno-beat is setting the scene, fueled with some dark spacey psychness, electronically flavored middle-eastern atmos, the desired amount of spacey bubbles, a piano jazzy intervention… All these “elements” are creating a superb Kozmique Neo-Space environment, a rather Cool tune! “Twisted Kamasutra” develops a deep 70s Soul n’ Jazz drumbeat, add a funky guitar sound and you have a late-night Ambient-flirting Soul-ish tune that emerges an erotic feeling, this is a much different track than the opener that makes you wonder what comes next? Too many directions are opened up wide, an experiment with music and sounds that can lead to Soul, Jazz, Space, Rock, and Funk paths… “Eldorado” (music by Susanne Baum, lyrics by Edgar A. Poe) is electronically flavored, drenched into mysticism with a kind of an experimental psych spacey rock feel, changing from soft to heavy and vise versa, a Space Trip to a lost land… “Julia Dream” is the band’s homage to the early 70s period of Pink Floyd, a respectful cover, a modernized Spacey version with a remarkable piano sounding that literally launches the tune into the Stratosphere… The Krautrock inspired “Trippin’ On Mars” follows, Kraftwerk meets Neu! while electronic sound-beats are blending with Psychedelic mushrooms creating a modern aged Krauty Space Rock anthem, so psychedelically trippy… “Space Travel Agent” with its dark futuristic atmosphere is a New Age relaxing Space Prog tune… Eventually, the album closes with “Quicksand” (18:47), it starts with a mysterious electro-beat, the Sax adds a magical flavor, lots of Spacey effects, but there’s a Poppy charm all over the track and a Trip-Hop feeling with an experimental feel and when the Sax takes the lead then we all are transported into a colorful Prog-Jazzy-Soulish universe… A Space Trip indeed! A remarkable eclectic debut that will keep all of You Space Rockers out there, busy for a long time… Apollo’s Journey just started… TimeLord Michalis

Listen/Buy through THE SUN OR THE MOON Bandcamp

Visit THE SUN OR THE MOON Web