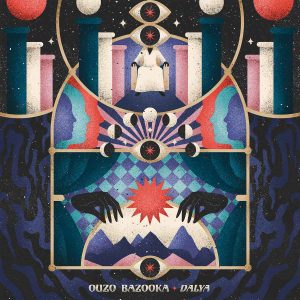 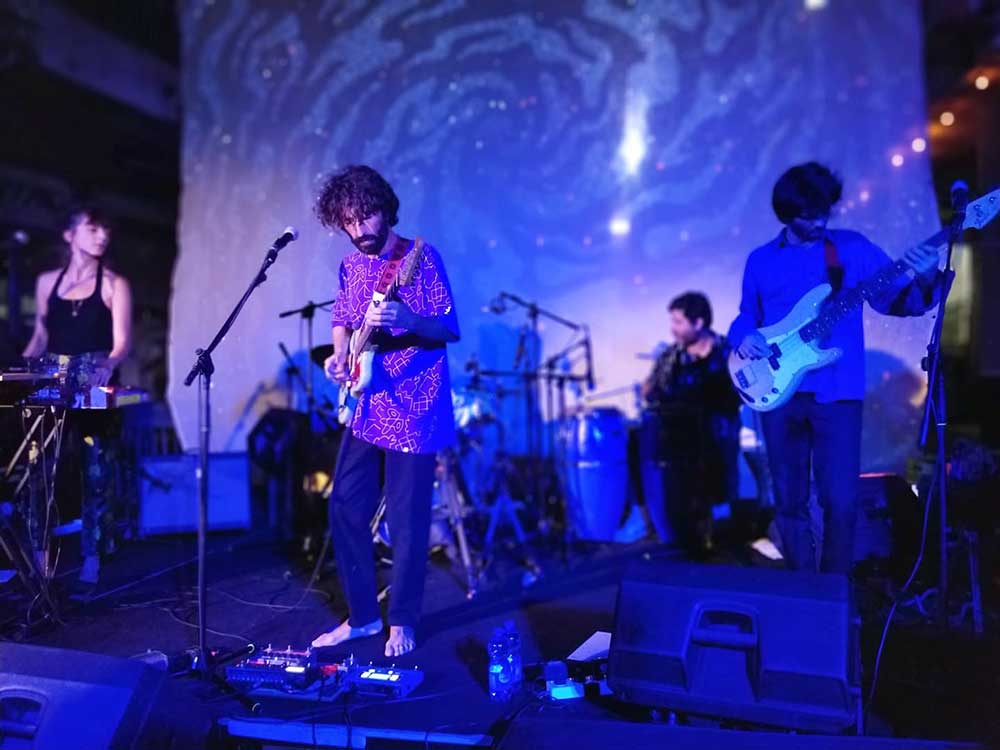 Ouzo Bazooka can be described as worthy ambassadors of the so-called Middle Eastern Psych Rock, they formed in Tel Aviv, Israel, and since 2014 they released 4 albums with “Dalya” being their 5th… The press release on their Bandcamp states: “The undisputed champions of Middle Eastern psych-rock return with Dalya, their epic fifth studio album. Suspiciously smelling like a mix of prohibited substances and powerful home-brewed potions, Dalya manages to effortlessly be a lot of things that, in a similar universe, contradict each other: it is psychedelic but accessible. It is adventurous and creatively free-spirited, but also filled with anthems waiting to be discovered. The sound is recognizable but simultaneously original and an expansion of the band’s wide creative palette”…
Dalya consists of 6 long, swirling, hallucination-inducing doses of music to be consumed with your eyes wide shut. But make no mistake – this is still Ouzo Bazooka’s good ol’ sweaty oriental fuzz party. Monsters, the album’s opener, has the anthemic qualities one would secretly hope to find on an Ouzo Bazooka album. It is followed by the sun-stroked dubby and dare we say disco-ish Million Years Of Light, continues with the dense and sweaty instrumental pieces Al Hagamal and Kruv and continues to ascend with It’s A Menace towards the spectacular climax that is Nine.
Filled with imaginative, mind-bending moments, Dalya is yet another monument in Ouzo Bazooka’s epic sonic journey and a grand new chapter in the band’s story”…

“Dalya” consists of 6 tracks, three on each side of the LP and it kicks off with “Monsters”, the band makes a rather impressive entrance! A tremendous Psych environment is instantly been created by the musicians while this “cursed” guitar psych-riff that is repeatedly played at the back, launches the song into this Great Neo-Psych Middle Eastern universe while huge amounts of ‘Acid’ is released to the stratosphere, everything is so perfectly mixed up, a heavy psych amalgam of sounds! “Million Years Of Light” is a slower but groovier tune, Dubb-ier you may describe it, with a funky-psych distorted kind of Middle Eastern musical scale, a fantastic psychedelic danceable rhythm unfolds while unexpectedly and brilliantly the track speeds up and takes the listener one lever higher… What a tune! I believe that the Ozrics would have loved to write this one… Side ‘A’ closes with the instrumental “Alhagamal”, straight Middle Eastern Rock by the very first note, another remarkable song with a great Psych-Oriental feel! Side ‘B’ opens with “Kruv”, another instro, with an amazing electric guitar sound, a track ideal for an ecstatic belly-dance, Oriental-Psych, yeah! “It’s A Menace” with its rapturous rhythm makes you wanna dance, a Middle Eastern-inspired song that extremely flirts with Oriental Space Disco-Delia! Eventually, the album closes with “Nine”, a track that keeps on flirting with Middle Eastern but now with a more Rock attitude, it feels like the 2 different worlds, East and West, collide and a new musical species emerges, a new musical hybrid that combines Oriental and Psych… Well done Ouzo Bazooka, and thank you for making Middle Eastern Rock, sounding so psychedelically exotic! TimeLord Michalis