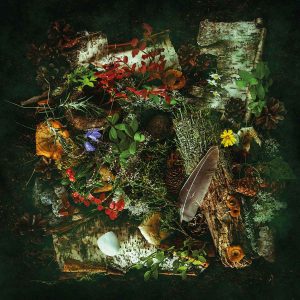 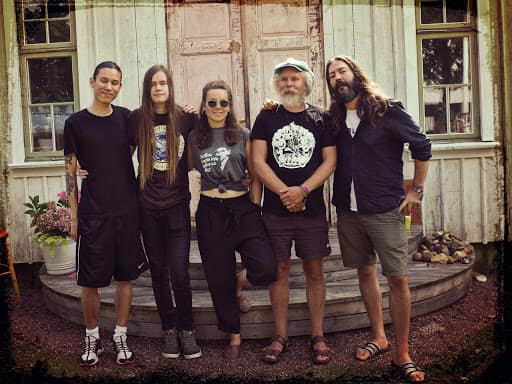 Agusa is one of the BEST bands to emerge from Sweden in the last 10 years or so. So, far they have released 4 LP albums and 2 Live ones. “En Annan Varld” is their 5th release, following 2017’s “Agusa” LP and introducing 2 new members, on bass and organ. The press release reads: “This album, several years in the making, contains two sidelong tracks of flute rock extravaganza. Some records tend to deliver exactly what’s expected of them, but that’s not the case here. Instead, AGUSA are exploring some uncharted sonic territories and you’ll probably be surprised by their progress. Be prepared! This is AGUSA’s first studio release since their self-titled 2017 outing and the first one featuring new members Simon Ström (bass) and Roman Andrén (organ). The cover design is an original work by bass player Simon Ström”…

So, “En Annan Varld” (that translates to “Another World”) contains 2 sidelong tracks. Side ‘A’ is occupied with “Sagobrus” (24:52), it sounds like Agusa’s familiar characteristic colorful soundscape with the only difference that now there’s an intense Prog mood all over the track, also, I can discern a more mature ‘treatment’ on the music they wrote, on the instruments they’re playing… Is this because it’s been almost 4 years since their latest studio work? Did the lineup change play a role? I care less… At the moment I will deal with the AMAZING sounds that are blasting my speakers… Folkie-Rock, flute-dominated, perfectly interchanges with powerful old-fashioned guitar-based Prog-Rock, I can sense some ‘Canterbury’ touches and a flirt with Art-Rock… This is like a Prog Sphere that pushes the dipole Flute – Guitar to a ‘bras de fer’… But wait! The keys… Those magnificent Organ keys are driving the song out of the Prog Sphere… How astonishing! Towards the end, the band creates a remarkable fantastic Mike Oldfield-ish environment that can easily be fitted inside Tubular Bells… On side ‘B’, “Uppenbarelser” (21:12), tries a huge dive into a dark unknown territory of the past ages, this is old-school Prog that blends with Folk… The keys are dominating the sound, the flute shows the way, the drums/percussion are trying to keep a light on… Guitar discreetly enters this feast of Sounds… The scenery becomes heavily creepy, while everything has been transformed into an Acid-Prog heavy soundscape, the guitar starts to shine, this is deeply underground Heavy-Prog that becomes darker and darker… Somehow, through the acoustic guitar, the track manages to reach the surface again… During this Trip, the band definitely lost their Folk-Rock way but they magically succeeded in coming back, safe… Obviously, there’s a significant turn in the band’s direction/sound… One step further… And I think this step was/is very successful… So let’s wait and see what the nearby future will bring… And by the way, “En Annan Varld” is One of the BEST albums of 2021! Invest… TimeLord Michalis

But it through SOUND EFFECT RECORDS Web Store