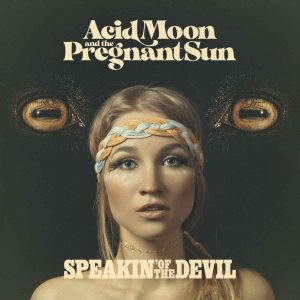 Let’s start by saying that the name of this band is very beautiful and very 60s Hippie inspired. Acid Moon And The Pregnant Sun is a band from Tel Aviv, Israel, and their debut album “Speakin’ Of The Devil” was originally a digital release through their Bandcamp, in July 2020. The German label, Tonzonen Records, is releasing the album in physical format, LP and CD.  Acid Moon And The Pregnant Sun state through their Bandcamp page:

“From the depths of the forest, dripping away on the endless jam, Acid Moon & the Pregnant Sun slip through the holes of existence and emerge playing. From the city of Atlantis to the Castle in the Sky, we bring our psychedelic circus to the joy of all. Broken shattered laughter, cracking the night’s spell, gazing to the distance, waiting for the morning colors to save our haunted souls.

Acid Moon started playing together about five years ago. The group was formed by the couple Eden Leiberman and Aviran Haviv, both active musicians in the Israeli music scene who were looking to fulfill their passion to create a living, breathing psychedelic musical group. During this time, the band has performed at numerous festivals and clubs across the country, many of which were put together by the group”…

“Speakin’ Of The Devil” is written and arranged by Acid Moon and the Pregnant Sun, the band members consist of Michael Izaky (Drums, Vocals, Guitars, Percussion), Aviran Haviv (Bass, Vocals), Omer Haviv (Electric Guitar), Dan Ezra (Vocals, Electric Guitar, 12 String Guitar, Acoustic Guitar, Effects), Ido Bar-Or (Electric Guitar, Acoustic Guitar), Eden Lieberman (Keyboards, Piano, Vocals), Nachman Yuda Ben Baruch (Percussion), and Dan Deutsch (Percussion). There are also a few guests participating in this breathing psychedelic musical group, Ehud Danan on Electric Guitar on track 2, Yoel Chajes on Vocals on track 6, and Aviv Ezra on Percussion on tracks 3, and 5.
There are 7 songs on “Speakin’ Of The Devil”, the opener “I Love You” is a lovely song deeply influenced by the 60s hippie ‘culture’, warm vocals, freshly sunny 60s West Coast guitars, pop-rock vibes emerging, a fantastic production with a pinch of a late 60s folk-rock. The scenery becomes clearly Folk-Rock, on the self-titled “Speakin’ Of The Devil”, 60’s influenced, of course, reminding bands like Buffalo Springfield or C,S,N&Y, there’s also a strong Country-Rock feel but it seems that I’m getting flashes or signals, and I’m bringing to mind Bono’s singing style on “With Or Without You”… this is strange… The next one, “Creatures Of The Abyss”, is one of the strongest moments of the album and my personal highlight, the tune starts with a strange kind of drumming and I’m expecting someone to start singing “please allow me to introduce myself…”, but, no… The track slowly evolves into a Folkie-Country-Psych-a-something weird tune with excellent instrumentation, a strange kind of singing (like a very fast Scat singing), a jazzy feeling is emerging while after the 4th minute the whole tune dives into a magical musical Psych-Folk-a-delic atmosphere, becoming sophisticated trippy! Incredible! “Wide” starts and you can imagine members of Sha Na Na and Grateful Dead (mid-70s era) jamming in the studio while Sly Stone is supervising, then you’ll certainly get the picture of what is going on this track, in other words, Dance to the (Psychedelized) Music! “Bright Sky At Night” is an acoustic kind of a ballad with a Bluesy feel while “Save Me” has an intense Rolling Stones feel (it could be a track out of Sticky Fingers), a poppy country-ish Rock-a-Roller and I insist, The Stones would love to have written this song for their next 2022 album… The last one is called “Sparrow”, a soft ballad with a nostalgic feel, the music is relaxing but towards the end, it emerges a strong Grunge-y feeling but without losing its balladesque form… So, Acid Moon And The Pregnant Sun released a very cool 60s inspired album, that does not sound as it is recorded in 2020. Not at all! And, I think that this is an achievement, at least for me! I’m really looking forward to their next step… TimeLord Michalis

Listen through ACID MOON AND THE PREGNANT SUN Bandcamp

Get it directly through TONZONEN RECORDS Web