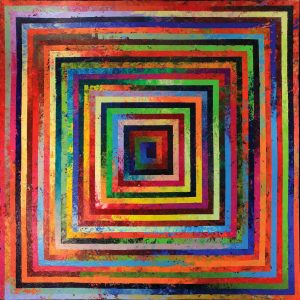 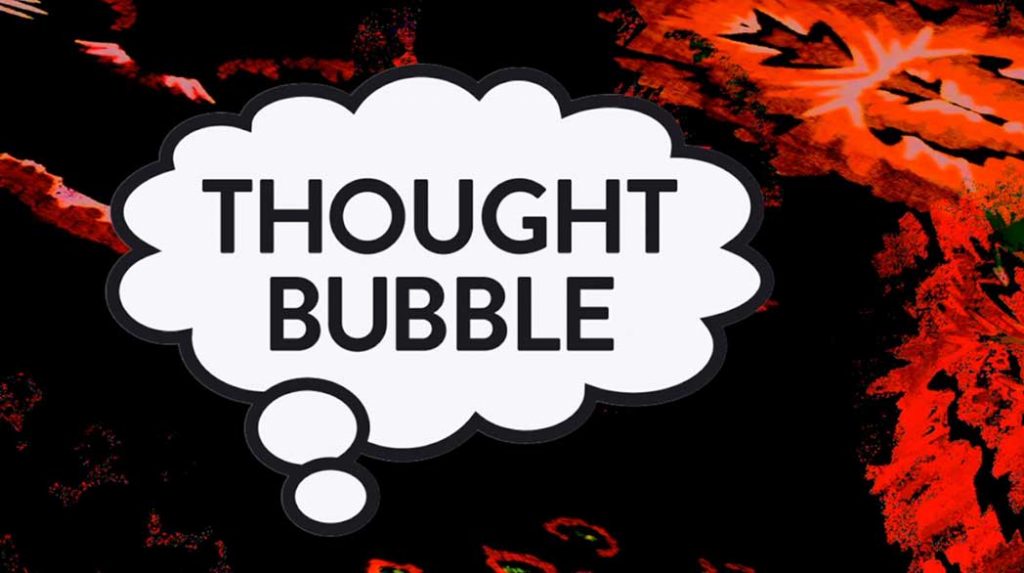 Back in 2012, Nick Raybould sent me his “Things” CD by the band Glowpeople, for reviewing… The music was fresh and quite exciting… Fast forward to 2021, Nick sent me a download link for another project, called Thought Bubble… Recently, I came across Thought Bubble through Fruits de Mer Records and a club-members-only CD compilation entitled “Music For Amphibians” (Check the review here). The band participated with the track “Waves”… Thought Bubble is an improvised electronic and analog percussion duo, consisting of Nick Raybould and Chris Cordwell and they cleverly state that “…no set style or genre. The music comes out in whatever form it wants. Sometimes we invite friends to add elements, post-production”… Their LP album is called “Around” (I think it’s their debut LP) and the label’s press release, reads:

Dirty Filthy Records are proud and rather excited to announce that we will be releasing Thought Bubble’s debut album, late Summer 2021.

This collection of pieces will take listeners through some dark downtempo grooves – but then suddenly pound them with startling beats that will rattle furniture!

Having spent the last decade or so as members of various psych and spacey fusion bands, on the psychedelic rock festival circuit, keyboardist Chris Cordwell and percussionist Nick Raybould had maintained Thought Bubble as their cherished side project. It’s now time to bring it into the open.
DJs and podcasters for psych and prog radio shows have already been drip-feeding their audiences some of these tracks – steadily building up an appetite for something more tangible and tangerine.
Several pieces on this album feature additional guest musicians, brought in to add texture. Be it guitar, clarinet, or voice.

‘Around’ will then be made available for download and streaming via the Thought Bubble Bandcamp portal as well as Spotify, iTunes and Amazon, etc.”…

“Around” consists of 6 tracks/compositions and it kicks off with “The Waves”… The Waves and Patterns are merging… Under a strong eerie psychedelically electronic background the tune slowly unfolds mystical electronic musical waves in the air while the clarinet (courtesy of the great Gregg McKella of Paradise 9 – also Shaun Bailey of Monkey Trial is on guitar here) adds something occult, outlanding, and all these together along with the various “background sounds” are creating a rather psychotic scenery, dark enough but experimentally trippy! “Beatwave” is electronically flavored, there’s a robotic ‘Space-Krauty’ beat and some wonderful early 80s Kraftwerk-influenced keys, a very futuristic danceable electronic experiment! “Mobius Trip” starts under an electronic weird psych musical background with a spoken word intro, the music gets weirder as the tune evolves, this one could be an ideal theme for the movie “War Of The Worlds”, epic, futuristic, cinematic, the additional guitar sounding is quite trippy, making it a FANTASTIC tune, creating an imaginary three-dimensional Euclidean Space where you can float outside your body… Wow… “Rat Race” is another electronic experiment with various non-compatible synth sounds, a rather strange ‘scientific’ electro tune… “Fluctuate” with these sound modulations and various frequencies (and I’m sure that some of them cannot be heard by the human ear), has an adventurous synth-y environment, the clarinet blends with it and make the atmosphere even more trippy n’ cinematic, making you feel like swimming in a sea of electronic musical waves, you can see them, you can hear them, you can touch those waves… The album eventually comes to an end with “Devoider”, a different track, the scenery changes, becomes more ambient but manages to preserve its creepy identity and the mood to experiment… Well, “Around” is a really enjoyable album and I strongly recommended it if you’re in the mood for some safe virtual trips! TimeLord Michalis

Get it via DIRTY FILTHY RECORDS webshop