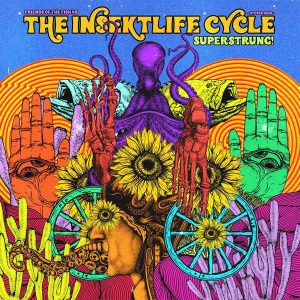 I first met this exciting Instrumental trio from the Philippines back in 2015 when Fruits de Mer Records (Yes! Them, again!) released the split 7-inch lathe-cut Single under the title “Switzerland meets The Philippines”, The Cats Never Sleep played “Soma” on one side while on the other The Insektlife Cycle performed  “Sungaze”… Many Singles later and a couple of albums – you can check the review of their 2019 album here – FdM records throughs in the market another The Insektlife Cycle release, this time it’s an 8 inches lathe-cut entitled “Superstrung!”, on a very limited run of just 100 copies, and as the band states “𝗦𝗨𝗣𝗘𝗦𝗧𝗥𝗨𝗡𝗚! is a four-track EP for worshippers of heavy psych, stoner/acid rock and prog—and everything between sunshine acid and neon explosions”. “Superstrung!” is also released as a cassette by Philippines label PAWN… …and as a bonus, the band is including a two-track CD “Blues Man Blues”, featuring their covers of songs originally recorded by Filipino guitar legend Wally Gonzalez, who sadly died very recently.

“Old Year’s Eve” is a powerful guitar-based instro with a groovy melody becoming heavily fast, heavily slow, and vice versa… The self-titled “Superstrung!” uses the same heavy musical pattern with a pinch of improvisation and a mood – of course – for experimentation. With all these ups and downs it feels like riding a musical seesaw! On side ‘B’, “Sol Velvet” is a more laid-back tune, dream-a-like, improvised with some groovy-funky instrumentation. “Recline” which is my favorite here, is a late-night groovylicious tune with a rather strong summer sex-a-delic feeling, it’s music that you can listen to for hours without getting bored… “Superstrung!” is a wonderful taste of what the band is up to these days, so what about a new album boys? TimeLord Michalis

Listen through THE INSEKTLIFE CYCLE Bandcamp

Try your luck getting it via FRUITS DE MER RECORDS Web