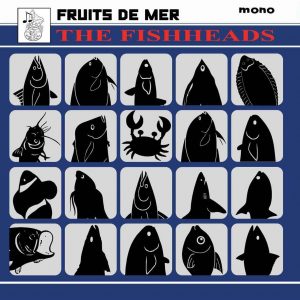 This is a 7-inch vinyl single that was supposed to be released last summer (2021) as a “Summer Of Love Fruits de Mer Records Single” but due to the already worldwide known reasons, it’s only six months late. It’s a Single by a one-off supergroup of FdM’s recording artists (unless they continue to record under The Fishheads moniker, so we can say “goodbye” to the one-off thing, hehe…) The Fishheads were put together by Astralasia’s Swordfish, with the help of a number of Fruits de Mer Records’ friends, including Anton Barbeau, Crystal Jacqueline, Icarus Peel, John Chinn, Paul Chousner, Holly Bowler and more.

Keith, Head of FdM Records says: “Fruits de Mer gets back to its roots as a 60s/70s covers label as The Monkees’ classic ‘Pleasant Valley Sunday’ (written by Goffin/King) is coupled with ‘Let’s Get Together’ (written by Chet Powers aka Dino Valenti, arguably the quintessential 1960s love-and-peace anthem) on a 7” single. It’s a real throwback to those happy, innocent, drug-fuelled days that I’m far too young to remember. For added authenticity, the single is cut in mono, the sleeve is one of those glossy flipback jobs (the glue tabs are on top of the rear face of the sleeve as opposed to being inside, like 7” EPs used to be)”…

The single comes with a bonus CD, including stereo versions of the two songs, an alternative mix of “Pleasant Valley”, and a modest little 40-minute mix by Swordfish that occasionally sounds a bit like the tracks that it’s based on.
On the ‘A’ side, The Fishheads cover a Carole King – Gerry Goffin track called “Pleasant Valley Sunday” taken from The Monkees 1967 Vinyl Single “Pleasant Valley Sunday / Words”. The characteristic ‘Rickenbacker’ sound of the beautiful colorful popsike 60s is there, a fresh reinterpretation that brings out California’s warmth of sunshine! On side ‘B’ we meet the classic “Let’s Get Together”, it was written in the mid-1960s by American singer-songwriter Chet Powers (stage name Dino Valenti). The song was originally recorded as “Let’s Get Together” by the Kingston Trio in a live performance in March 1964 that was released on June 1, 1964, on their album “Back in Town”… Many beautiful versions were released, Jefferson Airplane, Youngbloods, HP Lovecraft, Cryan’ Shames, Smith, and so on… The Fishheads are offering a fresh and pretty close to the original version, with wonderful rich vocals, giving you the feeling that you’re in this commune, and everyone is outside, making a circle, and there’s a fire in the middle, and everybody is singing… A cool Psych-a-splendid version, indeed! TimeLord Michalis

Get it through FRUITS DE MER RECORDS Web (UK customers)

Get it through SHINY BEAST Mailorder (Worldwide customers)