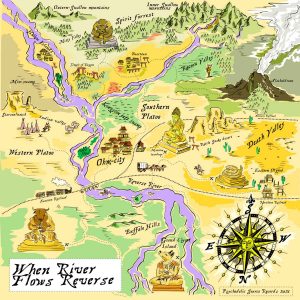 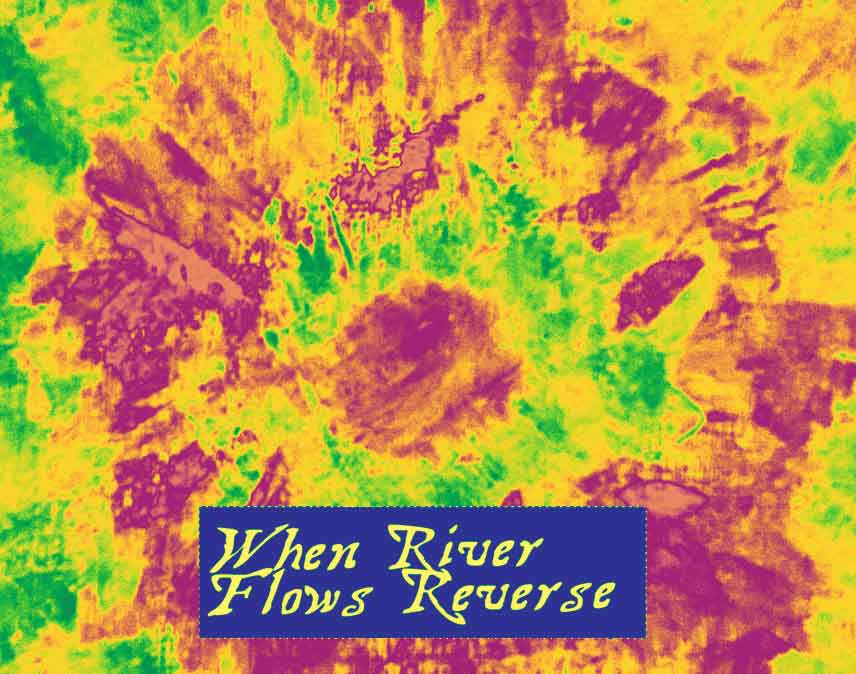 Through the Hungarian Prog band Lemurian Folk Songs (check my review to their 2020 album “Logos” here) I was led here and I was really enjoyed this “new” discover that goes by the name River Flows Reverse. River Flows Reverse are hailing from Hungary and they are not actually a band. A few members from the Psychedelic Source and Lemurian Folk Songs gathered together in a cold shed in the middle of the muddy forest of Hungary, and under the name, River Flows Reverse they recorded this Magnificent set of songs and released them through Greek label Twisted Flower. On their Bandcamp page, they simply mention “We are a kind of ‘bored’ in this concert-less situation, so we are playing with our instruments then. We think, this is a masterpiece of our ‘curfew’ recordings”. The musicians that are taking part are Kriszti Benus (vocals), Lőrinc Sántha (vocals), Nico Delmas (trumpet), Gergely Gadolla (some noises), and Bence Ambrus (various other instruments). And I believe that the main ‘force’ here is Hungarian guitarist Bence Ambrus (sorry no further information is available here).

The double album is called “When River Flows Reverse” and it consists of 10 songs/compositions, though only 8 of them are presented on their Bandcamp, and since I haven’t got the vinyl in my hands yet, I can only say a few words about those 8 songs… But, I promise to write a few more lines about the last 2 tracks (D1 and D2), sooner or later… The album kicks off with “Leaving Shades Ahead”, under a serene and rather bucolic environment, the track slowly unfolds a warm sweet, and full of nostalgia acoustic melody, suddenly a banjo enters the scenery and along with some female ethereal vocals, the song is automatically being transformed into a wonderful haunted Psych ballad… making you wonder “What is going on here?”… The scenery remains with this bucolic touch on “At The Gates Of The Perennial”, but now there’s a strong Folkie feeling emerging through the improvisational acoustic start of the song that is drenched into mystery… Slowly, the environment obtains a cool Psych-Jazzy complexion while the tune dives deep and deeper into an acid flavored Psych-Folk soundscape, and the guitar is distinctly painting the whole musical canvas here with some psychedelic colors that can drive your imagination far, far away… “El Sendero” is an instrumental tune, using a similar magical acoustic folkie environment while the serene guitar sound along with the eerie background sounding are acting as an introduction to the next one simple entitled “El Sendero II & III”, the landscape has by now become weirder, folkier, with an acid touch (of course), some mind-bending percussions are filling the air while suddenly a voice breaks the peaceful atmosphere only to make it sound more magically Psych-a-Folk-a-Delic… and then there’s that ‘funeral sounding’ trumpet that leads the track into Proggy fields, the music by now has become extremely hallucinogenic and trippy, leading – literally – to Mind Penetration. This is so unbelievably Redemptive! The haunted but sweet female vocals are back again on “Final Run”, this is another moody kind of “Murder” ballad, dark and psychic, drenched into melancholy, introducing the most “Psychedelic” banjo sound I heard since… the 60s… characteristic but very distinctive. In “Rain It Rages”, the acoustic guitar and the trumpet are knitting a sad melancholic landscape, the banjo enters to shine a light in this dark guitar-trumpet encounter while the female (and always ethereal) vocals are giving the track the folk-a-delic balladesque shape it deserves… “Oriental Western” is another strange tune that is built upon a “psych-banjo-sound” while “Ripples” has a very sensitive acoustic starting, can easily bring tears for no particular reason, this one has male vocals and progressively it evolves into a fantastic mind-blowing tune, reaching to no climax! Side ‘D’ occupies 2 more songs, “Woodman Woo Wily” and the 18min long “Karneval” which I have no idea how they are sounding because I do not have the 2LP record set yet in my hands… But, soon my pretties, soon… I’ll better go now and check my post and see if ONE of the BEST Albums of 2021 has finally reached me! Do not let it pass you over, go search and find the album, you will feel pleasantly euphoric after listening, or else you’ll regret it sometime later… Trust me… TimeLord Michalis