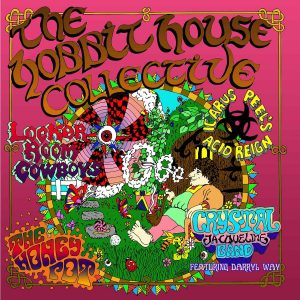 Fruits de Mer Records enter its 15th year as a label with a remarkable double 7-inch vinyl single introducing The Hobbit House Collective! A collective consisting of FdM’s regulars Crystal Jacqueline, The Honey Pot, Icarus Peel’s Acid Reign, and The Locker Room Cowboys! Wow! There’s also a very special appearance that I will reveal later on… So, The Hobbit House Collective has put together four recordings, which spread out over four sides of vinyl. There’s one original song and three covers and I must tell you that it’s the first time Led Zeppelin have found themselves mentioned on an FdM release… Side One is occupied by the classic Plant/Page song “The Battle Of Evermore” (originally from the 4th Led Zeppelin album in 1971). That distinctive astonishing haunting melody is here, at the very first beginning and we should not start comparing Sandy’s voice with Jacqui’s, it’s pointless. Crystal Jacqueline blew a fresh breath into the song. A marvelous reinterpretation in a more acidly psych Folkie way, it’s like a Psych-Rocket that is slowly being transformed into a splendid Neo-Prog tune thanks to the luminous violin sound courtesy of Darryl Way, yes, THE one from THE Curved Air! Superb! On Side Two, there’s another Plant/Page composition, the evergreen eternal “Ramble On” (taken from 1969’s II album), The Honey Pot and Crystal Jacqueline delivered a very inspiring cover, drenched into a colorful Folkie veil with really interesting things going on at the musical background. Side Three belongs to Fleetwood Mac, and I really can’t think of any other existed/recorded covers of the All-Time-Classic “The Chain”, originally released in the legendary “Rumours” album in 1977. A modernized and quite electrified version by Icarus Peel’s Acid Reign, a cover that flirts with the weird ambient side of the Neo-Prog movement, a different version, a difficult version, and of course that f@cking Buckingham’s solo is here, dynamic and more red-hot than ever! This is not a replica, not an exact copy, this is not a simple cover. Icarus Peel and his Acid Reign literally took the song to another HIGHER level! On side Four, there’s an original tune by The Locker Room Cowboys entitled “Wolfgang Does The Nurburgring”, it’s a powerful instrumental, electric guitar-based, upbeat tempo, with a tremendous Hammond 60s groove and some adventurous drumming/percussion… The Hobbit House Collective is a Fantastic 7-incher, a Double Pleasure that can only raise the bar high of what to expect from Fruits de Mer Records for the new promising 2022! So, go, secure yourself a copy, now! TimeLord Michalis

Get it through FdM Records Web

Order it from SHINY BEAST Mailorder