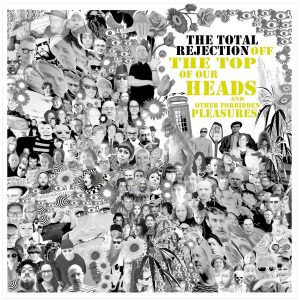 Hailing from Bristol, England, The Total Rejection are describing themselves as a Garage, Pop-Psych group, mixing a love of the Pebbles LPs, Barracudas, Seeds, 13th Floor Elevators, The Who (65), Pretty Things, Milkshakes, Electric Prunes, TV Personalities, Kinks, etc… With a healthy D.I.Y Attitude… Well, this is exactly what you get from their releases! An ideal mix of the US Garage with the British Beat with lots of influences of from the 80s neo-garage scene, of course! “Off The Top Of Our Heads.​.​.​ And Other Forbidden Pleasures” is released through Raving Pop Blast! Recordings (as all of the band’s stuff) and let’s have a look at the informative text taken from The Total Rejection’s Bandcamp:

“The 4th ‘Studio’ LP (5th LP in total if you include the live one) by The Total Rejection. Once again, we have some scorching hot Garage rockers (I’m Coming Home, Paul’s Eye, Turn Your Head Around, etc) but this LP sees the Pop-Psych element brought more to the fore. Some of the songs might not at first be quite so ‘instant’, but with repeated plays, it could turn out to be your favorite TTR album to date… (or not…)
The album was created in three parts… Half before Covid / Lockdown, Half during the gap where we were able to go out. Then part had to be re-recorded after a freak ‘Tapes, Coffee & Dog’ accident destroyed some tapes of the album!
THE BAND THEMSELVES SAY…
“We wanted to keep it quite raw and edgy” (They did).
“We wanted to push things slightly” (They have)
“We wanted to have a bit of fun with the recordings” (It shows).
“We wanted to avoid making a ‘lockdown’ LP (They did)
“We wanted this released fast, right after it was finished” (They didn’t, thanks to Adele and others, including so-called ‘cool’ labels such as Optic Nerve with their tiresome re-issues!)
We think this is a great LP We hope you will enjoy it too.
SOUNDS BEST PLAYED AT A LOUD VOLUME!”…

“Off The Top Of Our Heads.​.​.​ And Other Forbidden Pleasures” consists of 10 songs, six of them occupy the first side and the rest four are on the second side. The album kicks off with “Degenerate Head Movie Turn On”, a dynamite song with a weird musical background, a song that flirts with garage, power-pop, and indie while the final result is rather addictive and quite fuzzy (yes!), a Pop-Sike n’ Roller, and I need to mention the incredible splendid ‘Madcap Laughs’ ending… “Turn Your Head Around” is a Garage-y Punk-ish stomper with a frenzied rhythm, a real Shake-Baby-Shake dance-a-delic anthem! On “Twitching And Jabber” with have tremolo, reverb, echo, and fuzz on his Groovy Majesties’ Service! This is a psychedelically effected rock n’ roller! “Ten Minutes Off The Top Of My Head” is another rhythmic tune with a cool fuzzy guitar sound, a nice poppy melody, quite cinematic, a fuzz-a-delic tune! With “Everybody Loves Grass” you must expect nothing less than a frenetic rhythm, shimmering-hot guitar sound, and ‘spicy’ lyrics, of course. A very Grunge-y and Punk-y dynamic song! At this point we must admit that the titles used for their songs are really inventive observable and quite interesting, like the one that closes the ‘A’ side, which is called “Paul’s Eye John’s Teeth”, the title itself can make your imagination running, right? This is a crazy R n’ B wilder, with pounding drums and a guitar solo coming straight out of some late 60s British hot live act of the Marquee! Side ‘B’ opens with “Garden Full Of Green”, a post-modern ‘loud’ Rock n’ Roller with a really mind-blowing guitar-psych effected middle section! “Drive Me Home Or Don’t Waste My Time” is another ‘fast n’ furious’ Rock-a-Roller while “She’s Making Money Off Me” is even more powerful, guitar-based of course, a Garage-y Punk n’ Roller! The album eventually comes to an end with “I’m Coming Home”, an unbelievably incredible song with a start that comes straight out of “My Generation”, actually, someone can say that the whole song is built upon the famous ‘start/stop’ singing behavior! An ideal ending for this powerful album with a wild garage-rocker! And after a few seconds of silence the listener witnesses a weird piece of samples, voices, sounds… It’s something that has to do with number 17, but I can’t even imagine what the band is talking about! Strange, but cool… So, The Total Rejection being steady to their “musical beliefs” delivered a hot and powerful set of songs, an album that blends the Sixties Garage (of the US) with a unique extraordinary mix of the hot mid to late 60s British R n’ B scene, and the result is a record that can easily lift off any party out there… Not to be rejected at all! An ideal record to boost your adrenaline and get you to another level… Get yours now! TimeLord Michalis

Get it directly from Raving Pop Blast! Recordings Bandcamp 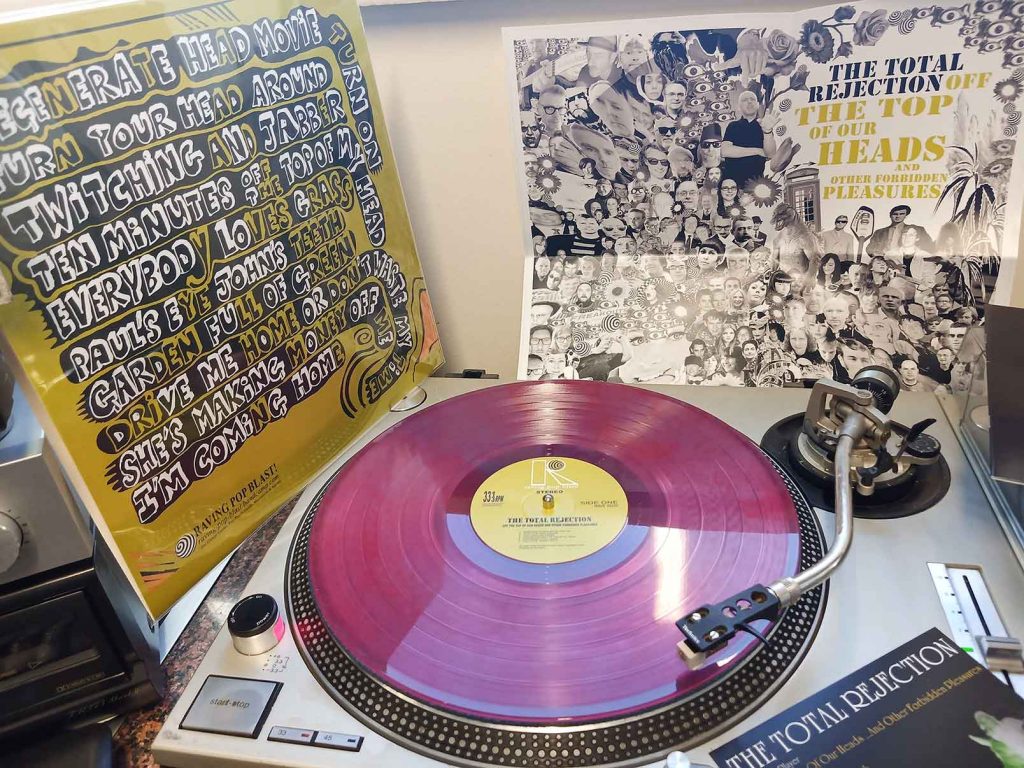 “picture taken from my personal collection”