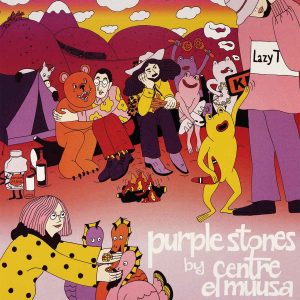 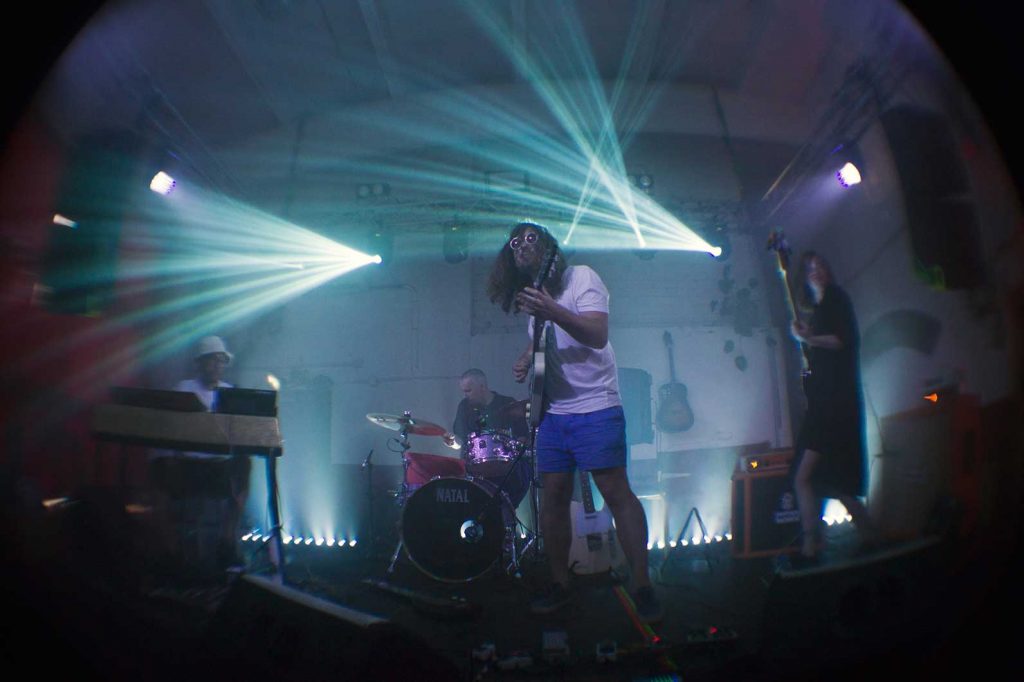 Centre El Muusa are hailing from Esthonia and “Purple Stones” is their 2nd album, the follow-up to their 2020 debut “Centre El Muusa”, both albums – of course – are released through Sulatron Records. You can check my review of their debut (here). The press release that Dave (Sulatron) sent us leaves no wonders about this exciting new effort by the Esthonian band:

“Sulatron Records is proud to release the second album Purple Stones by this great Estonian underground band! The follow up of the highly acclaimed debut album which was out on Sulatron 2 years ago! Again this album is made by these 4 musicians, including one of the most creative and prolific multiinstrumentalists in Europe: Misha Panfilov. He is famous for his (mostly) instrumental psychedelic funk singles and electronic albums by Misha Panfilov Sound Combo (Funk Night Records, USA), as well as the jazzy krautrock by Estrada Orchestra (LP Playground was released 2021 on Sulatron). Volodja Brodsky is a co-founder of the band (and Member of Estrada Orchestra) and a master of the Wurlitzer electric piano & space synthesizers. Plus Monika Erdman on electric bass and Aleksei Semenihhin on drums.

Centre El Muusa is an Estonian psychedelic rock quartet founded in 2018 (previously named as Centre Electronique Muusa). The project, which started as an avant-garde electronic duo of Panfilov and Brodsky in 2015, developed into a rock band when it was joined by Erdman and Semenihhin.

Gradually, the band transformed their sound from uncompromising garage krautrock to more spacious psychedelia with noticeable elements of ambient and country-rock, while maintaining their signature lo-fi approach to recording and not avoiding risks.
Recorded and produced by Misha Panfilov. Mastered by Jörgen Hermaste.
Live bonus tracks taken from the Sunrise Concert at Aidu Windmill Park, September 2020, which you can see completely on Youtube!”…

Yes, the “EL” in their name stands out for “Electronique” and let me start by saying how I was ending the review of their first album: “I’m pretty sure that all you underground-freaks out there, you’ll find this piece of wax interesting and enjoyable enough, while as for myself, I will be waiting patiently for their next step, wondering which direction are they going to follow”… Well, at least to my ears, to my mind, and to my temperament (at the moment), Centre El Muusa followed the right direction…

The album consists of just 6 songs/tracks while the CD includes 3 more bonus live tracks. The opener “Pony Road” is a dark-psych tune based on a red-hot electric guitar, emerging a Country-Rock feel, flirting with the glorious mid-70s British Prog scene, while the “Riders On The Storm” keys are really stealing the show here… But only temporarily because the guitar takes the lead (again) and transforms the track into a distorted amalgam of Heavy Cosmic Neo-Country (!!!) “1978” acts like a dark-psych Country anthem taken from a forgotten Western movie from the far past, soft and trippy, with a mellow repeatable hypnotic rhythm, this is an improvisational tune that also manages to dive deep into the Proggy 70s, the British ones, of course… “Desert Song” is another country-ish tune, dark (of course), heavy at times, flirting intensely with Psych, slowly becoming hypnotically trippy with Jazzy Prog mood. Side ‘B’ opens with “Boomerang”, a much heavier tune, with a krauty edge, a grunge-y guitar sound, becoming electronically distorted with trippy but powerful drumming, following an adventurous improvisational scale, a quite addictive song! “Keila Train” is a slower number, trippier, and jazzier, with a cool sounding melody through the guitar while the wandering keys are giving the track a Jazzy-Prog atmosphere… The LP version of the album comes to an end with “Pilot On Board”, there’s a steady Krauty beat and a mood to investigate Space through Prog paths, under a huge Psych attitude, a lysergically trippy tune that manages to reach the Kraut Rock boarders… The 3 bonuses live tracks are the heavy and distorted Impro Jam “Ain’t Got Enough Mojo”, the torturously slow psych and trippy mind-travel “Mia”, and a groovylicious Krauty version of “Pilot On Board”… So, what we have here is a remarkable album moving from Prog to Country-Rock, to Krauty-Rock, to Psych, to Jazz, to Electronic Rock, and Centre El Muusa are doing this with extra mastery and super cool songwriting! A record that is impossible to make you feel bored! A must for the year 2022! TimeLord Michalis