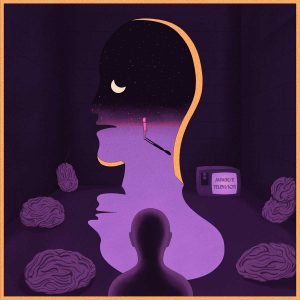 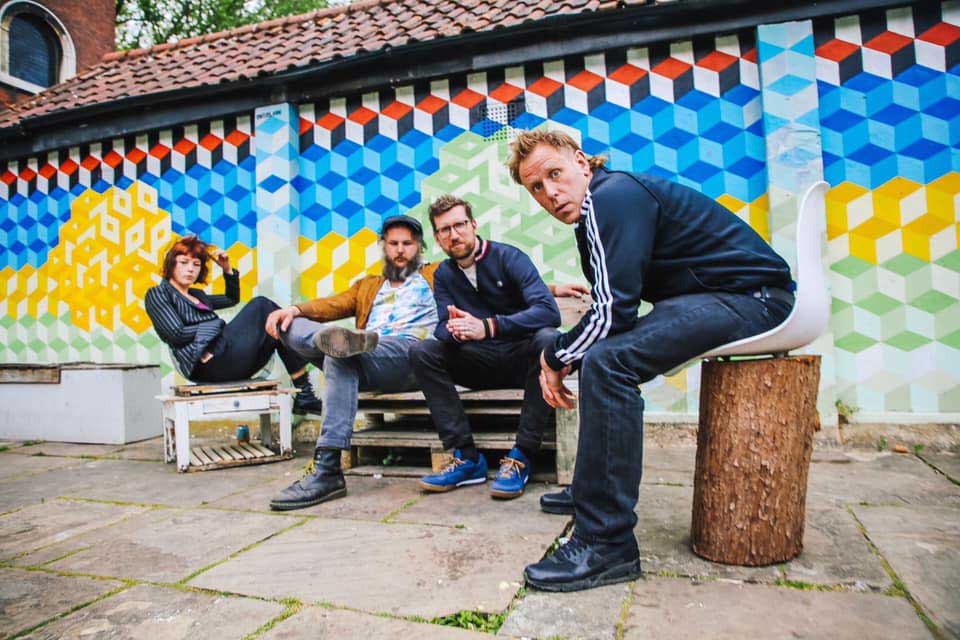 Japanese Television has nothing to do with Japan and obviously nothing to do with Television! They are a new English quartet, who likes to Surf in Space (!!!) and since 2018 they have released a numerous CDR Singles, all of them via Tip Top Recordings. So, the boys thought that it was time for a full album and here we are reviewing their debut, called “Space Fruit Vineyard”…

The short press release reads: “After the cosmic brew of their first three EPs, London space-surf four-piece Japanese Television are ready to present their debut album, Space Fruit Vineyard, out 15th April via Tip Top Recordings. A full-throttle blend of psych, surf, sci-fi, garage rock, and everything in between, its 10 tracks solidify their claim as one of the most exciting bands around. The world’s only 100% space-surf outfit, Japanese Television holed themselves up in Yaxley village hall to record their debut full length with The Wytches’ Kristen Bell. Songs were recorded in one take straight onto tape capturing the blistering rawness of the four playing together. With Space Fruit Vineyard Japanese Television take their brand of intergalactic psyche and blast it to the edges of the universe. Forever teetering on the brink of chaos, their debut album is a testament to both their individual skill and collective vision, a wild ride down the center of a wormhole”…

“Space Fruit Vineyard” consists of 10 tracks, 10 Instros, enriched with some Cosmic Surf Space stardust. The self-titled opener “Space Fruit Vineyard” is literally a “dynamite” song, with many fluctuations not only in the rhythm but also in the attitude! For sure, it gets you in an “alert” mode leaving you with an intense feeling of curiosity about what’s coming next… It’s a song that acts like the Band’s Theme… remember back in the 60s when every Instro band had its own “Trademark” Theme? …  “Moon Invasion” has a more laid-back rhythm, keys and guitars are creating a cool cinematic, and very James Bond-ish Instro, though the attitude of the songs changes rapidly towards its end, flirting with Psych! “Mosquito Dance Routine” is another cool Instro with a very adventurous rhythm and a rather lo-fi Spacey atmosphere… just imagine a Surf band, high on Acid, trying to play the main chords of “Lucifer Sam”, and you’re halfway there! “Ghoul Rules” is a Surf-Psych instrumental played in the middle of a desert somewhere in Arizona… Are these dudes, English? … “Bruce Willis” is a heavier track (exactly as heavy Bruce is on some of his badass movies) with lots of Spacey effects and distorted guitars… My personal best 3 tracks of the album are about to follow… “Sputnik Swimming”, is a cooler tune, emerging a sad and kind of nostalgic feeling though the background is very complicated, windy, pompous, becoming psychedelically trippy, just imagine a Surf-Spacey-Psych modernized version of the guitar part of the magnificent “Walk On By” (Isaac Hayes’ version from 1969) blended with a smooth and jazzy trumpet, creating a tremendous Psych atmos that can really blow your Mind! In order to understand what’s happening inside “Doppelgänger Disco”, imagine Davie Allan And The Arrows on Acid, on a faraway beach, in Space (of course!), then maybe you’ll get a slight idea of this Psych-Surf gem! The triad of my personal highlights is completed with “Snake Shake”, a darker tune, kind of Middle-Eastern drenched with a catchy Psych guitar riff that leads the song to various places, not simultaneously of course, but as the track develops, the listener is moving to various soundscapes out there… “Freddy’s Back” has fuzzy guitars and a steady surfy beat, it’s like riding a huge rollercoaster in Space, an explosive tune that for sure is going to make you sweat! Eventually, the album comes to an end with “Bumble Rumble”, a Psych-ier tune, the fuzzy wah-wah guitar sound is creating a mind-blowing Psych-Surfing Sixties atmosphere! “Space Fruit Vineyard” is a very cool album, a very groovy album, juicy and surfy that guarantees not only satisfaction and sweat but euphoria too! It could be the soundtrack of the summer of 2022… A listening pleasure that left me with a desire to go and unearth my “Folkstone Prism” LP… TimeLord Michalis