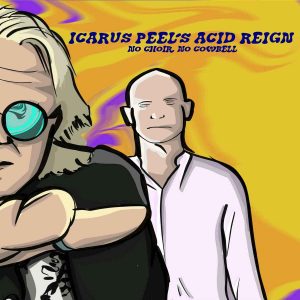 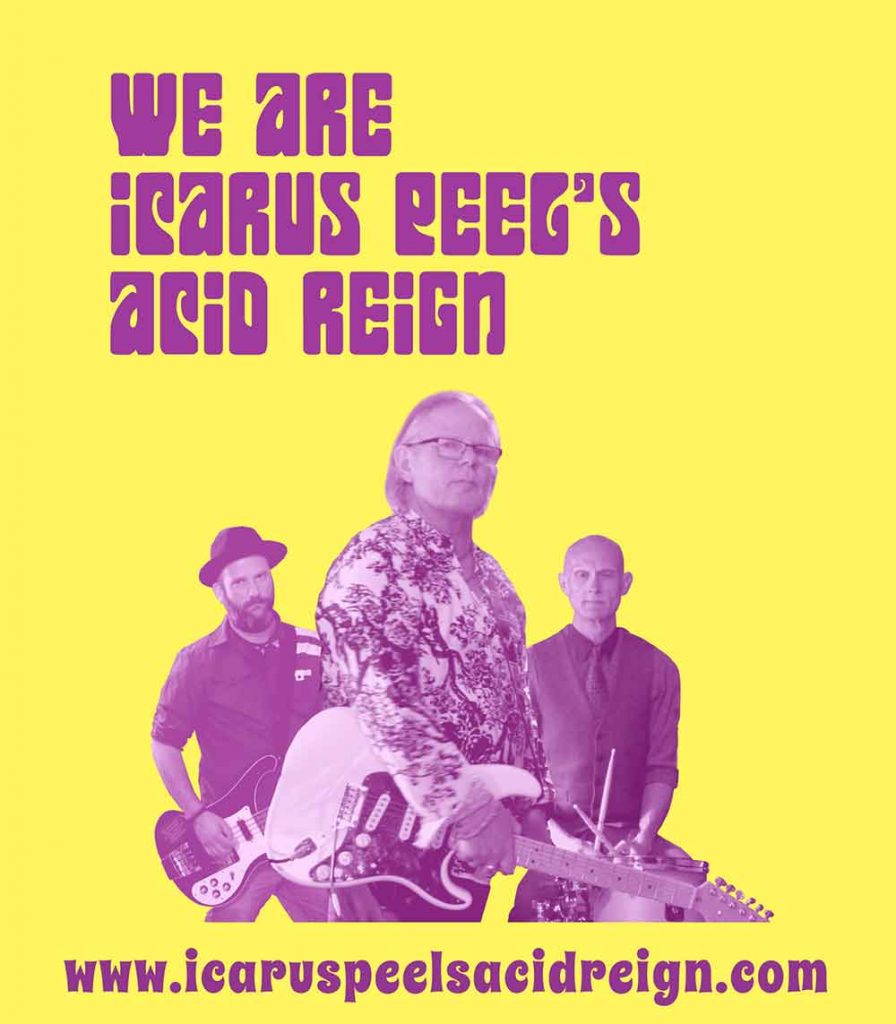 Icarus Peel is a very busy busy busy musician! Except for his solo efforts, he is involved with bands/artists like The Crystal Jacqueline Band, The Honey Pot, The Locker Room Cowboys, Mordecai Smyth… Icarus’s main ‘vehicle’ is Acid Reign, consisting of Icarus on guitar and vocals, Andy Budge on bass (also member of The Cary Grace Band and The Honey Pot), and Jay Robertson on drums/percussion (he has worked with Icarus in his solo works). Their debut album “The Window On The Side Of Your Head” (check review) was released in 2018, and the follow-up “Shallow Oceans” (check review) in 2020 and now it’s time for their 3rd effort entitled “No Choir, No Cowbell”, released through Mega Dodo/Billywitch label, like all previous ones. “No Choir, No Cowbell” contains 10 songs, 8 of them are original compositions while the 2 others are covers. The opener “Why On Earth” starts under a strong and steady beat, this is pure British Pop-Psych, Icarus’ guitar takes the lead, and as if by magic you are in front of Icarus Peel’s Acid Reign characteristic Sound, that the band “founded” in their previous releases and normally is continued here too… “No Expectations” was originally a 1968 B Side of “Street Fighting Man” single, here’s a modernized reinterpretation, this is a more Neo-Psych approach to the Stones tune, with a killer bass line that replaced Nicky Hopkins piano, while Brian Jones’ slide guitar has become super electric in Icarus’ hands, a nice and rather cool cover that for sure will “resurface” this Jagger & Richards’ wonderful composition… “Come Angel” is a cool rhythmic tune with an excellent electric guitar sounding, Popsike has taken the place… “Dreamtime Disorder” is a different track, with a punky attitude (not a punk sound though), more “Rock” less “Pop”, there’s no singing here as Icarus “speaks” the words, an electrified and quite shimmering shiny tune! “E.T.A.” is another kind of strange song, with a weird approach in orchestration and singing, an adventurous Neo-Pop Psychic tune… “High” is built on a killer bass line making the song a great hi-energy Pop-Psych Rocker! “I Will Find You” emerges an experimental feel, a weird track that dives into Psych, a quite esoteric tune while “Strawberry Symphony” is an eerie Psych instrumental… On “Quong” there’s an intense early 80s Floyd atmosphere, starting as a super cool song and ending as a bloody cool Psych one! Eventually, the album comes to an end with another cover version, a reinterpretation of Arthur Lee’s classic tune “Signed DC” from 1966. The soft and magical guitar playing of Icarus really transcends time and set us NOT in 1966 and Love’s first LP but into 1969 and “Out Of Here” LP… Yes, there are more similarities with Arthur’s 1969 version… The whole musical environment here is super Psychedelicious! So, Icarus Peel’s Acid Reign delivers another astonishing cool album, with no choirs, no cowbells, just mind-blowing POPSIKE majestical music! Well done boys… TimeLord Michalis