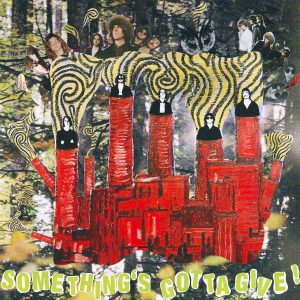 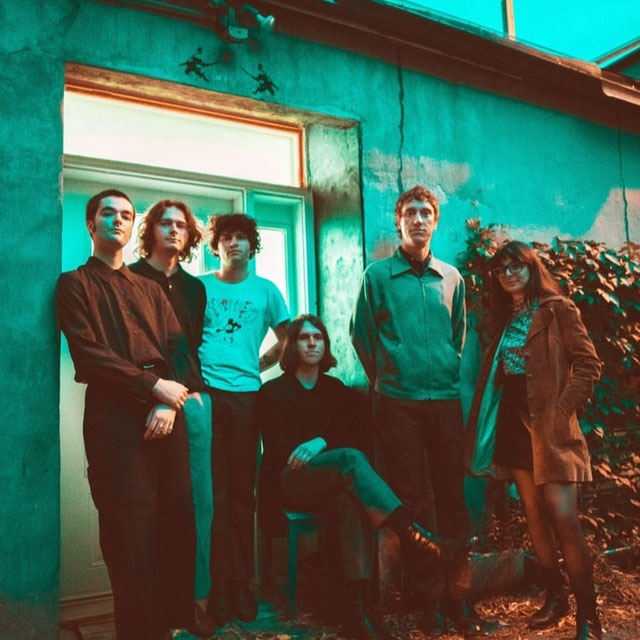 The John Denver Airport Conspiracy is a new band hailing from Toronto, Ontario (Canada), and “Something’s Gotta Give!” is their debut album, 3 labels collaborated for this release (!!!), Cardinal Fuzz, Little Cloud Records, and Fuzzed Up & Astromoon Records… The labels’ press release reads:

From the thudding jangle of album opener ‘The Big Classic’ to the closing Velvet chug and strum of ‘The Lab’ The John Denver Airport Conspiracy will take you by the hand and lead into a psychedelic dreamworld of electric sugarcube flashbacks,

So, let’s see what we have here… At least, someone by just watching the collaged colorful front and the black & white back cover can sense a very strong 60s aesthetic… What about the music?

“Something’s Gotta Give!” consists of 14 tracks and it kicks off with “The Big Classic”, a jangly sound (as the press release “promised”) with a late 60s psychedelic mood. I do not know if the band intended to do so, but the whole production is a bit “buried” and kind of “lo-fi”, this is quite obvious on the 2nd track “Jeff Bezos Actually Works For Me”, though this “production” does not prevent the final result to be nothing else but a Groovy Garaze-y Psychic stomper… The short “But We’re Not Expecting It To” is entirely built on the cool melody of “Jumping Jack Flash”, with lots of “ouh ouh”, a modernized Flower-Power tune, that’s what it is! “Green Chair” blends 80s Neo-Psychedelia with 60s Garage while on, “Ritchie Says” the decibels are lowered, a balladesque kind of melancholic tune. “2000 November” is a neo-garage-psych-o-active song that flirts with mid-60s British Rn’B… “Ya, I Wonder” can be described as a garage-y dance-a-delic song while “The Big Greaser” is a poppy garage jangly track. “Coming Through!” is a slower number, something like a ballad while “JDAC” comes to full antithesis with the previous one as it shows a much more garage-punk attitude. “And The Question Is?” is a super cool “distorted” Psych-a-something track with an intense “White Light/White Heat” atmos and pinches of Inspiral Carpets and Stereolab… This one and the next are my personal highlights of the album… The next one called “Eternity”, is a very different track, a psychedelic effort deeply influenced by the late 60s Laurer Canyon company emerging with an electrified folkie feel… “Because You’re Told To” moves to the same “territory” as the previous song but now the vocals are even more “buried”… Eventually, the album comes to an end with the most punky tune in here, it’s called “The Lab”, a late 70s punky approach to the late 60s Velvet Underground sound… So, I believe that my first “rendezvous” with these Canadian Psych dudes went pretty OK, I “left the building” quite satisfied… and I’m anxiously waiting for my appointment with their next step… release… TimeLord Michalis