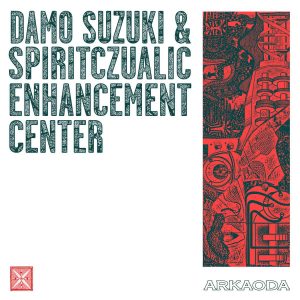 Ageless and Never-Ending Spirit Damo Suzuki is back (again!!!) with another exceptional release! This time, his crew is an 8-piece band called Spiritczualic Enhancement Center! The informative press release leaves no wonder…

“As a traveler-without-age, Damo Suzuki has been touring all over space-time. Presenting the light of “instant composing” to new generations, he refers to his makeshift collaborators as sound carriers. Exactly fifty years after the release of the profoundly iconic Ege Bamyası, we can hear his voice on yet another fantastic album, as in “derived from fantasy.” Manifested from the meeting with Spiritczualic Enhancement Center — an eight-piece group of self-proclaimed disciples from the CAN University have gathered at Arkaoda (Turkish for “backroom”).
Named after the place in Berlin where it was recorded, this release freewheels down the Autobahn of Consciousness as it swerves along that ancestral road. A witness of this session was quoted calling it “unfiltered, freeform, de-programming music.” The LP’s three volatile tracks called U, Ra, Beja (Japanese for “backroom”) are unity-enhancing non-boolean excerpts from this gathering at the beginning of 2020. Let your children hear this!”…

The band/gang consists of Damo Suzuki (vocals), Nicolas Sheikholeslami (drums), Faani (percussion), Etkin Çekin (bass), Æladin (guitar), Omri Shmulewitz (keys & vocals), Carl-J. Hoffmann (synthesizer), and Alexander P. Jovanovic (synthesizer).
The 3 tracks of the album are recorded at Arkaoda, Berlin, 27.02.2020. The opener “U”, is a 20-minute Psych-Watercourse! Damo is improvising with his voice, his vocals, the music is quite trippy, there’s a complex Heady psych background, LSD flavored, Damo’s voice follows the music, but also the music is following Damo’s voice into unknown undiscovered territories, Damo sings, speaks, recites through numerous changes of the mood, emerging a tremendous trip-a-delicious feeling! The 6-minute “Ra” has a more ‘laid-back’ relaxing environment, electronically trippy, and extra improvisational while the way of Damo’s singing changes the soundscape… He is fast, then the music accelerates too… He is slow, then the decibels are lowered… And when Damo becomes creepy with a mysterious Screamin’ Jay Hawkins charm, the music follows and becomes creep-a-delic too! Amazing! The last one is called “Beja” (14:21), Damo is more ‘acting’ with his voice than singing, then he stops… But the band continues, presenting a hallucinogenic experimentally trippy MIND EXPANDING environment, some colorful Space-Birds appear at the horizon, the music becomes even more psychedelic second after second, early 70s Floyd comes to mind, then some Space-Dogs are kind of approaching, and all of a sudden everything is black and deadly quiet. End of the song… Thank God that I had it on repeat mode… “Arkaoda” is a modern aged free-form Mind-expanding album destined to be haunting me all the forthcoming lonely nights… TimeLord Michalis