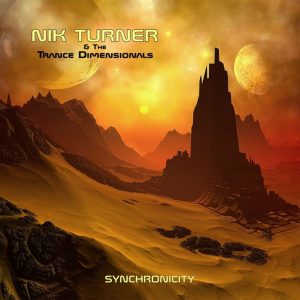 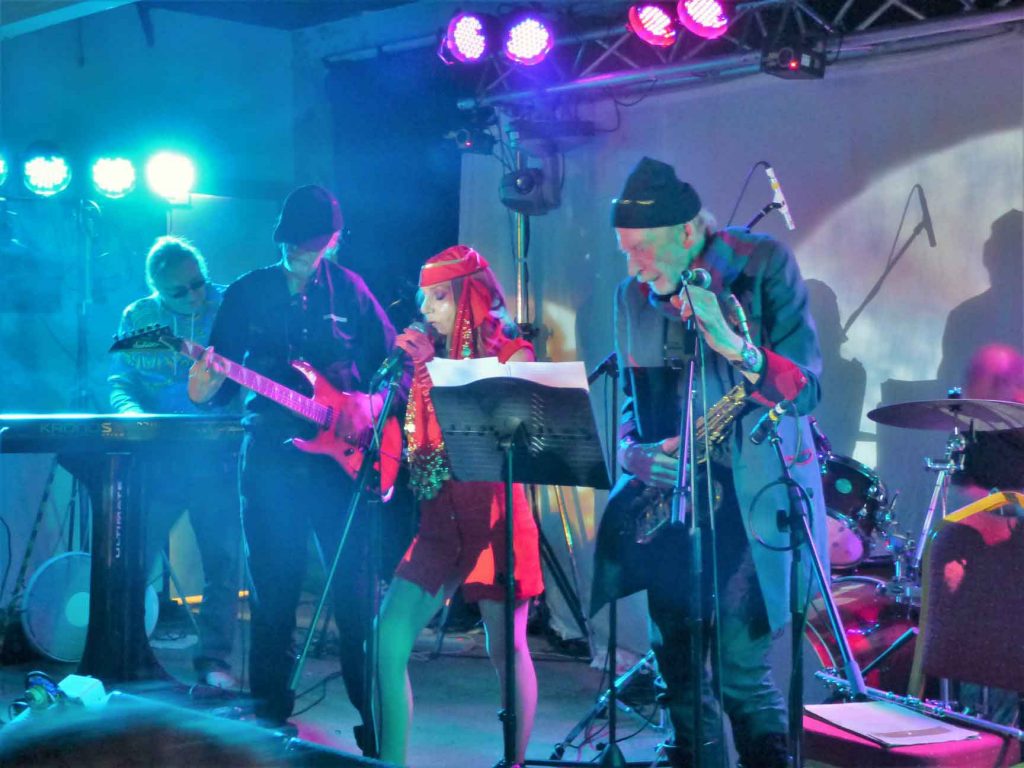 This is an astonishing mind-SPACE-expanding collaboration between the always restless Nik Turner and a new band (new at least for me) called The Trance Dimensionals formed by guitarist/keyboardist Steve Hillman. Let’s check the informative press release to get an idea of how all these came about:

“The TRANCE DIMENSIONALS band was formed by English musician Steve Hillman in 2016. Steve had been making electronic sounds with his audio generator since the early 1970’s when as a teenager he was influenced by Tangerine Dream, Hawkwind, and Gong. In the 1980s, as a keyboard player and guitarist, he was part of the then underground electronic music scene in the UK, and in the 1990’s he was signed to the progressive rock music label Cyclops Records who released four albums of his prog and space rock instrumental music. Steve has also collaborated with a variety of musicians around the world including the Greek synthesist Thaneco and with members of various orchestras, including the flute player with the world-famous London Symphony Orchestra.
In 2016 Steve met with the legendary Nik Turner, a founder member of the space rock group Hawkwind, and they discussed working on an album together. Steve had already written enough material for an album and he decided to form the TRANCE DIMENSIONALS band as a way of presenting the new material with Nik fronting the band. Some of the tracks Steve wrote specifically for Nik, in particular, “Thunder Rider Invocation” and “Sekhmet”, which purposefully harkens back to Nik’s Egyptian-themed album from 1978 called “Xitintoday”.
At the time Steve was also a member of a prog rock band called Ra Rising and he asked their drummer Dai Rees and bassist Clog to join the band.
Angel Flame, the dancer in Nik’s Space Ritual and the Crazy World of Arthur Brown, also agreed to join, and soon after Dave Anderson, who had played bass in the German band Amon Duul II, the Groundhogs, and on Hawkwind’s 1971 album “In Search Of Space” also came onboard. In fact, Dave plays on the new arrangement we have on the album of the song he wrote with Nik called “Children of the Sun”, that first appeared on “In Search Of Space”. Another veteran of Hawkwind, Mr. Dibs also joins us on the track “Taken to the Limit”.
The band had their debut live performance in June 2019 at the Sonic Rock Festival in Worcestershire, England”…

So, “Synchronicity” is the result of this musical “gathering”, released through Italy’s Black Widow Records, on a single CD, and on a double vinyl LP, though only 3 sides are ‘occupied’! “Synchronicity” consists of 11 SPACE ROCK shining pieces and it kicks off with “Destination Void”, as Nik’s narration starts the song, you get the feeling of a psych collision between the 2 greatest Space bands ever, the soundscape that was created after the explosion is so uniquely mind-blowing. Really excellent musicianship, amazing Neo-Space but with an old-school aura Atmosphere, with hot guitar licks, inspirational sax, pounding drums, heavy bass lines, and endless Spacey effects… (I’ll save you from the pointless wondering… PINK FLOYD and HAWKWIND… all in capital letters). Under a dreamy kind of acoustic Space background, Angel Flame’s soft and gentle voice introduces the magical atmosphere of “The Enchantress”, the narration ends and then a superb Space Hawkwind-ized soundscape explodes right inside your mind! “Taken To The Limit” features Hawkwind veteran Mr. Dibs on vocals, there’s an intense feeling of a “Spirit Of The Age” atmosphere, at least at the beginning, but slowly it transforms into something more universal… Side “A” closes with “Cloudlands”, a dreamy, serene, and Spacey environment, a track reminding the wonderful early Brit 70s… “Thunder Rider Invocation” opens side “B” and Nik through an amalgam of winds and echoes invites us by saying “I’m the Thunder Rider… come with me…”. The scenery is trippy, dark, and extremely Spacey with a crazy pompous attitude, till the acceleration of the track transforms it into a Heavy Space Rock tune. “Sphinx Dancer” starts with a catchy and addictive Space-Beat, this is New-Age Space music at its best, a fantastic instrumental, the flute adds something really exotic to the already proggy scenery while the characteristic Hawkwind trademark riff makes the final result a complete Mind Bender! “Sekhmet” is a sacred obsecration to the daughter of Ra, by Nik and his space gang, under a rather strange and deeply effected landscape… Side “B” ends with “Angels Of The Light”, a cool Neo-Space proggy tune, spacey synthesized with vocals by Richard Benjamin. The opener of side “C”, is called “Night Of The Jewelled Eye”, which transports the listener into the early 70s magical Hawkwind era, an amazing violin/guitar-based instrumental with adventurous rhythm and mood changes, it’s so hard to believe that this is not a song written by 1970’s original line up! “Abode of the Blessed” is another cool instro with an intense futuristic spacey sound, ending with Angel Frame’s touchy narration in a rather trippy way! The album eventually comes to an end with a new arrangement of “Children Of The Sun” made by Steve Hillman and performed by the whole gang, and as a special guest is Dave Anderson who had played bass for Amon Duul II, Groundhogs, and on 1971’s Hawkwind LP “In Search Of Space”. A modernized exciting powerful version, pretty close to the original, but magically and Spacey expanded to 7:12min! So, I know that it’s kind of cliche to say it but yes, Nik Turner – once more – teamed up with an interesting gang of musicians and delivered a Classic Space Rock LP, one of the best albums of 2022, and not just for the Space Rock genre! TimeLord Michalis