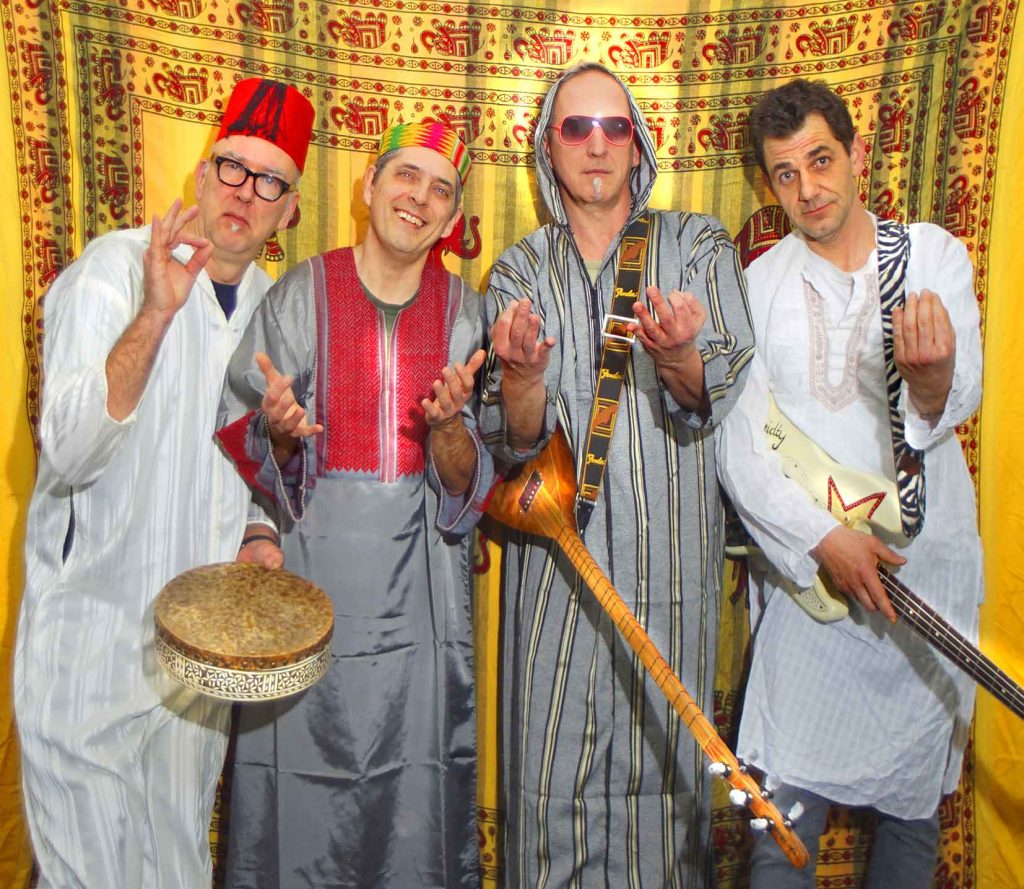 Grombira is an oriental space rock band coming from the city of Würzburg, Germany, and “Lunar Dunes” is their 3rd album, released (as the previous two) through Tonzonen Records. The informative press release says:

“With an oriental mixture of world jazz and psychedelic space rock, bring this four gourmet of worlds cuisine hypnotic sounds to the inner space of the audience. In their own universe, the sound gets re-invented and improvised, while each song is driven by the joy of exploring, desire to touch genre boundaries, and to exceed limits. Enjoy a flying carpet and lots of space for passenger´s dancing.

Grombira are back from the moonlit dunes of shimmering galaxies and have written down the travel diaries in their new studio album. On new paths, they travel through space and time with funky beats and psychedelic sounds of countless sessions over the last 2 years. From Indian space rock to the Mad Mullahs dance moves and the soundtrack from the cradle of civilization, this LP is a statement for diversity, creativity, peace & freedom. With Ahmed La Fünk on bass, Fredh al Fezer on drums, Habib L1 on keys, and – as usual – sheyk rAleph on sitar, oud, saz & multi-instruments, (who traveled as far as Essaouira / Morocco for recording sessions), at Volker Heller’s studio in Nassau once again they placed great emphasis on sophisticated arrangements and perfect sound, without losing the spirit of an authentic session character. As with the first studio album, the mastering was done by Busy Bühren from Truebusyness Berlin. It was a great pleasure to win the Japanese multimedia artist and winner of the National Geographic Award, Takao Sakagami, for the front cover. So it’s time to sit back, enjoy the trip and let your hips gyrate. Bon Voyage”…

The vinyl LP version of “Lunar Dunes” contains 4 tracks while the CD one includes one 5th track as a bonus. The album kicks off with “Saraswati Supercluster”, a long track (15:33) that after the 2min intro, you’re getting right-in-your-face exactly what the title of the album suggests: Oriental Space Rock! The tune is deeply influenced/inspired by Eastern musical motives, and it’s far more Oriental than Space Rock. It acts like a long improvised Raga based on Sitar (of course!), but after the 7th minute, the engines are quite warmed-up, so the Starship is ready for the long-distance trip to other places, and yes (!) by now the music has been magically transformed into an oriental Rock missile, the keys now are on the lead, sooner taken by the guitar, making the final result an impro spacey and heavily trippy anthem. On “Dune Tune”, the scenery becomes more laid-back, acoustic, oriental (of course) emerging a strong dub reggae-ish feel, nothing to do with Space Rock here, improvised oriental sounds flirting with jazz & funk a bit! Side ‘B’ opens with “Civilization One”, 13 minutes of a great blending of oriental music, spacey beats, and robotic voices, with Middle Eastern trippy vibes, all over. “Moonface Kumneitodis” is 6 minutes and 27 seconds of pompous epic adventurous and hot, Oriental Space Rock! The CD Bonus track is called “Mad Mullahs”, it is a quite danceable tune, an improvised jam, ideal to be played on a live concert, so the band members can be introduced, while each one of them “does his solo thing”, you know… “Lunar Dunes” is a very satisfying album, a pleasant listening, and it seems that Anatolian Rock has found an ambassador in the new days we’re trying to live… Invest… TimeLord Michalis