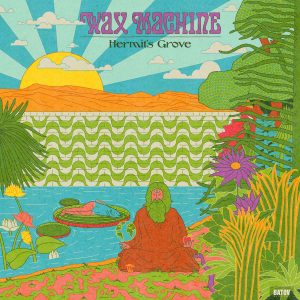 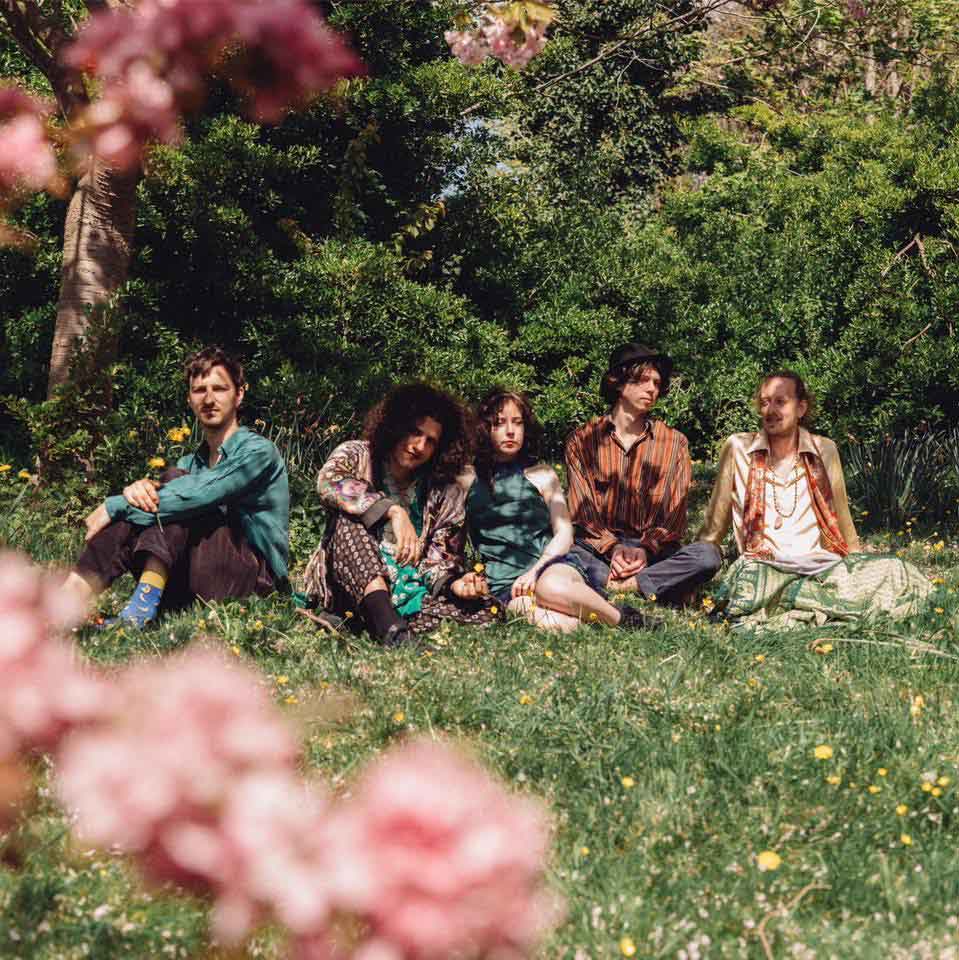 After their remarkable and astonishing debut album “Earthsong Of Silence” which was released in 2020 (one of the best albums of 2020 and No 3 on my personal list, check my review here:), this Brighton-based band called Wax Machine, returns with their sophomore album “Hermit’s Grove”, a quite different album than their debut! A more “grounded” album, a more “back-to-the-roots” album, I see it as an “experiment” by a gang of musicians, but I think that a closer look at the informative press release will make things clear enough for you to understand:

“Surfing on a sun-drenched wave of psychedelia comes Brighton’s very own Merry Pranksters, Wax Machine. Primarily recorded and mixed in a closet room directly above a mortuary, their self-produced album Hermit’s Grove is a heady trip through progressive psychedelia, kitsch Italian library music, and Brazilian tropicalia. Led off by the single Guardians of Eden, the album is set for release on 1st July via Batov Records (Şatellites, Sababa 5).
Wax Machine is the project of Brazilian-born, Italian/English-raised Lau Ro, who takes a deep dive into their Brazilian heritage on this LP, taking inspiration from 60s tropicalia music and movement and the likes of Os Mutantes, Caetano Veloso, and Gal Costa.
Lau: “Brazil is where I was born and grew up until I was 8 years old, and it’s where my family is from. We then immigrated to Europe and I was never able to visit Brazil after that as it’s a very expensive flight. Instead, I’ve opted for the next best thing which is connecting with the spirit and culture of Brazil via the medium of music.”
The album features a version of Canto De Iemanja from Vinicius De Moraes and Baden Powell’s seminal 1966 Brazilian album Os Afro sambas. Canto De Iemanja is about the goddess of the sea Iemanja, a chant Lau has often found themselves singing to the sea in their hometown of Brighton.
Lau: “The ocean is a muse of mine. I go to the sea whenever I can, her presence enlivens, refreshes, and brings me deeper awareness. This version is a homage both to my motherland and the great big blue that separates us.”
The first single and album opener Guardians of Eden is carried in on a cloud of flutes and birdsong. The first half celebrates the light and beauty of this world, while the second half is a reflection on the shadow of our existence here. The three-minute, psychedelic explosion of Springtime is a “meditation on the cycles of nature, the dance of duality, the swinging of the cosmic pendulum.”
Two EPs in 2018 preceded their debut album Earthsong of Silence in 2020, with Clash Magazine declaring that Wax Machine “occupies a space somewhere in the gaps where English psych-folk, sun-drenched West Coast sounds, Brazilian Tropicália, and spiritual jazz overlap.” That year they also had a track featured on the Mr. Bongo Record Club 4 compilation.
Although there is a constantly evolving lineup both in the studio and on stage, long-time collaborators Toma Sapir (drums, percussions, samples/synths), Isobel Jones (Flute/Vocals), and Ella Russell (vocals in Canto De lemanja) all appear on both albums.
A tour de force live, the group have shared the stage with the likes of the Babe Rainbow, Kikagaku Moyo, and Vanishing Twin. The band are currently in the midst of a UK and European tour, ending with a homecoming show in Brighton on 27th May.
On the album Isobel Jones plays Flute/Vocals, Toma Sapir – drums, percussions, and samples/synths, Freddie Willatt – sax, Ella Russell vocals in “Canto De lemanja”, Kate Mager – bass in “…Iemanja”, Adam Campbell – electric piano, Marja Burchard(from Embryo/Karl Hector) – vibraphones on “Gaian Dream”…

Now that everything is cleared up, let’s take a look/listen to the album. “Hermit’s Grove” contains just 7 tracks. The opener “Guardians Of Eden” has all these “ingredients” needed for a Tropicalia scenery, bird’s singing, serene flute sound (lots of), under a soft but electrified Brazilian mood, you can almost hear the tropical sun whispering to you… A bird of Paradise opened the gates for us all, to peacefully enter… “Tears From The Skies” has more laid-back atmos, now it’s time for the sea waves to come sounding from a faraway tropical beach, dreamy sounds and samples are all over, making this magical creation sound far away from a ‘normal’ song, the whole music over here acts like a summer anthem from a romantic movie scene from the 60s… “Springtime” starts and by now the scenery has become more “alive”, kind of blurry though, still flirting with a funky tropicalia atmosphere while the somehow distorted but soft jazzy sax sound steals the show! Under the sound of waves, starts the next one which is called “Canto De Lemanja” (written by Vinícius de Moraes and Baden Powell), and blends dreamy n’ sexy Latin vocals by Lau and Ella Russell while the atmosphere by now has transformed from the “strictly” tropicalia mood to a more Ethnik-sounding, and if you add the wonderful flute and the “psych” attitude in general, then you cannot but enjoy the final result. “All I Can Do” has a groovy rhythm and acts like a hazy sophisticated Soul-ish Bossa Nova that extremely flirts with all these beautiful Brazilian Pop-Nuggets of the 60s, with a tremendous let-loose “Low-Rider” atmosphere! The first 13 seconds of “Face Of All” are far away from the ‘usual’ atmosphere of the album, someone can call these 13 secs as a free-jazz experimental intro, but after that, the familiar psych-tropicalia soundscape unfolds in this track, too… Eventually, the album comes to an end with the SUPERB “Gaian Dream”, a quite trippy and adventurous instrumental that probably is the one track that perfectly “connects” the music of their previous album with this trop-a-delic LP. Of course, the track does not lose its tropicalia identity but it certainly moves into the Psychedelic fields of the “Earthsong Of Silence” album… Lau describes “Hermit’s Grove” as “An exploration into the tones of my Brazilian roots. The sound of surrendering to blissful solitude. An ode to mother Earth and a call for reconnection with her divine flow”… “Hermit’s Grove” is a transformational album, it is fresh and exciting and I’m pretty sure it will not disappoint you. Myself, I find it pretty satisfying and rather, cool! And of course, it left me wondering about the next album, will it be in the same direction, or it will travel us somewhere else? Time will show… TimeLord Michalis