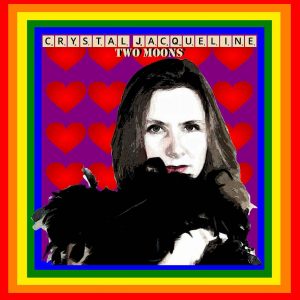 Our beloved Crystal Jacqueline is back with a new solo album entitled “Two Moons”, it is released through Billywitch Records (a sub of Mega Dodo Records) on a limited run of 250 LP copies and 100 CD ones. Let’s take a look at the press release:

‘Two Moons’ is a collection of psych-pop/rock songs with flavors of the ’70s in places. Altogether ‘lighter’ than Crystal’s previous albums while still maintaining the depth of lyrical imagination and instrumental intricacy where needed.
Some say it is her best yet!

“Two Moons” contains 11 tracks, songs, pieces of musical art creation. The album kicks off with the self-titled “Two Moons”, a modern psych-rock tune with a distinctive guitar fuzzy sound accompanied by the even more characteristic voice of sweet Crystal. “Lieutenant Stanley Dallywell” shows a cool and tight band with perfect musicianship while “Sundress” is a slower tune with a soft n’ sunny kind of acoustic melody, a song that flirts a bit with early 70s Folkie Psych… “Little Laurel” is a beautiful balladesque track with a notable and interesting acoustic psych guitar playing and a great psychic-folkie mellow atmosphere. “It Does My Heart Good” is a weird-sounded-effected track with tribal acoustic drumming, and a haunting guitar melody, a psych-rock track that somehow flirts with Alt-Americana (or whatever is this thing called at the other side of the ocean). “One Year Gone” is a song that deals with the 12 months, a short wonderful baroque-like piece of art… The following two songs are my personal highlights here, “Boudicea Love” is a fantastic mid-tempo tune drenched with some alternative psychness from the lost decade of the 80s while simultaneously you get a feeling that you are inside in an old song from the past, it feels like you are inside Norman Greenbaum’s “Spirit In The Sky”, what a lovely track by the way from 1969!!! The superb “Lake Of Azure Dreams” shines with its beautiful acoustic dream-a-delic psych atmosphere. “Our Love Will Not Decay” originally by Dubliners Tir na nOg (taken from their 1971 self-titled album), is presented here in a modern nice psych-baroque way with a cool acoustic guitar and Crystal’s sweet fragile voice, leading the listener through a glorious psychopath to other states of consciousness… “Travelling Stone” is a psych-rocker with really interesting instrumentation (at the front and the back also), a strangely structured song that finally manages to ‘win’ the listener. The album closes in a soft balladesque way with “Peace Will Come”, a tune full of intriguing electric guitar playing that gives you a strong feeling of nostalgia… So, “Two Moons” is an album full of stories, full of lyricism, and full of nostalgia for the old days. An album focused on the past, an album that blends the 60s, the 70s, and the 80s, in the most astonishing aesthetic way that leaves the listener, ‘full’, satisfied by the final result, with a cool bizarre nostalgic feeling… A Beauty, indeed… TimeLord Michalis