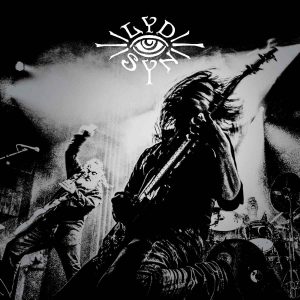 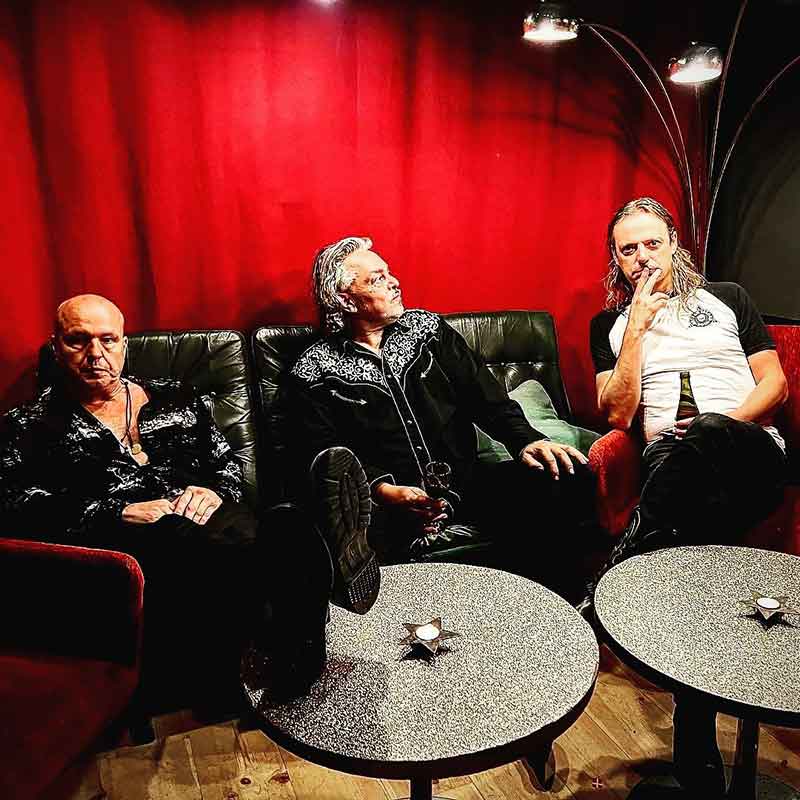 Let’s have a look at the press releases:

“Uffe Lorenzen (Lorenzo Woodrose) of Baby Woodrose, On Trial and Spids Nøgenhat fame has formed a classic power trio including his old friends Palle Demant (The Sledge) on bass and Jens Eyde on drums. The band was originally formed out of boredom due to Covid 19 lockdown and was meant as a backing band that would make it possible for Uffe Lorenzen to play songs from his recent solo albums live. As several tours went down the drain and was postponed also due to Covid 19 the band kept on rehearsing and ended up making their own material.

Since the release of the latest Baby Woodrose album, Freedom from 2016, Uffe Lorenzen has released three solo albums and it is quite obvious that he has missed the fuzz-guitar and there is plenty of that on the Lydsyn album which contains 8 Uffe Lorenzen-penned songs with Danish lyrics and a cover of “Hymne Til Kroppen” by the Danish band Splask from 1972. It would not be wrong to describe the album as Baby Woodrose in Danish – but more Hardrock and less psych.

The band will release their self-titled debut album on vinyl/streaming on September 23rd, 2022 on Bad Afro Records, and it was recorded, mixed and mastered by Flemming Rasmussen (Metallica and much more) at the famous Sweet Silence studio in Copenhagen”…

Now, having in mind the musical “turn” that Lorenzo made the last years (started in 2017 resulting in 3 solo albums) let’s have a close-up of the album. “Lydsyn” contains 9 songs and it kicks off with “Jericho”, straight Danish Rock, up-to-your-face, maximum power on a bad-ass Rock n’ Roller… “Døde Stamgæster”, is a cool heavy rocker that extremely flirts with some of ACDC’s mid-tempo moments from the 80s while “To Syge Skud” is a less heavy track that acts as a bridge, and somehow connects the music here with Lorenzo’s last solo album “Magic Realisme” from 2020. “Kat Ser Kat” is one of the strong moments of LYDSYN, just imagine the main riff of Steppenwolf’s “The Pusher”, dress it with a heavy guitar, put it on maximum power and you’ll get the picture… Let’s add a little Hendrix wah-wah madness to the recipe and see what will happen… a fuzzy heavy Rock n’ Roller, full of distortion and heavy powerfulness, resulting in a super cool cover of “Hymne Til Kroppen”, a track originally performed by the band Splask from 1972. Side ‘B’ opens with the lil’ garage-flirting track “Abernes Planet”, reminding though, some of Baby Woodrose’s moments from their last days, it’s still heavy, kind of fuzzy, and distorted with a dynamized rhythm and beat… “Tragisk Eskapisme” is a cooler number, with an intense early 90s Alt-Rock feel, a cool melody, a catchy guitar riff, a killer bassline, and the necessary (of course) wah-wah feedback! “Tårnet” is another mid-tempo cool hard rock track while the album comes to an end with the surprisingly astonishing “Bålet”! A much more “psych” tune, hypnotically trippy, a hot blues-rocker that could be an ideal track in order to dress a movie scene like the legendary lap-dance one from the film “From Dusk Till Dawn”… So, “Lydsyn” is a cool Danish Hard Rock album that will not disappoint anyone from the ‘regular’ guys drinking their cold beer in a Hard Rock café in every corner of the world… TimeLord Michalis