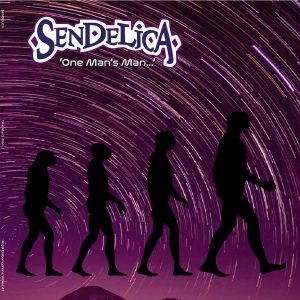 By now, Sendelica, does not need any further recommendations, right? With every Sendelica release, satisfaction is always guaranteed! “One Man’s Man…” is a new double LP by Sendelica and let’s have a look at the press release that Fruits de Mer Records provided:

“Sendelica is a psychedelic rock group from West Wales, formed in 2005, and composed of core members Pete Bingham (guitars and electronics), Colin Consterdine (beats, synths), Glenda Pescado (bass), and Lee Relfe (saxophones). The band have regularly collaborated with many musicians, artists, filmmakers, and performers over the years and, although primarily an instrumental group, with a variety of vocalists as well.
Sendelica conspicuously wear their influences on their sleeves and their music has been described as blending the hypnotic pulse of Can, the impressionistic atmospherics of Pink Floyd, the motorized proto-punk of Neu, the space patrolling guitar pyrotechnics of Jimi Hendrix, and the otherworldly ambiences of The Orb They are also known for drawing inspiration from the local landscapes of Cardigan Bay and the Preseli Mountains and the rich, ancient heritage of the region.
Following on from the critically acclaimed, and sold-out, album ‘And Man Created God’ which investigated the relationship between Man and Religion, Pete Bingham began to look into what made a hominid a ‘Man’?
It seems that deciphering when exactly man became ‘Man’ is as tricky a subject to answer as religion(!), so many false starts and dead ends, and even trickier is where are we headed as a species? Extinction or new horizons?
Such are the disagreements between expert Palaeontologists and Anthropologists that one such expert quipped ‘One Man’s Man Is Another Man’s Monkey’”…

The Sendelicans in this album are the usual suspects Pete Bingham (Guitars, Bass Synth, Mellotron Guitar, and Field Recordings), Colin Consterdine (Keyboards, beats), Lee Relfe (Sax), and Glenda Pescado (Bass). Also, Rhiannon Jones (Viola) and Mika Laakso (synths). So, “One Man’s Man…” consists of 4 long tracks, one on each side of the four sides of the album. Side One is occupied by the 3-part epos entitled “The Dawn of Man – Homo Habilis and Homo Rudolfensis”, there are some bells at the start and I’m wondering “is this the sound of the Notre Dame bells?”, anyhow… the track starts in a creepy kind of abstract electronic way with a mood to experiment, slowly becoming psychedelically Spacey and quite Doomy, the Sax keeps the track to the Ground while the heavily distorted guitar sounding creates a complete antithesis, the scenery becomes extra spacey and towards its end, you’re getting a deep Hawkwind-ized feel, majestical! Side Two consists of “Homo Erectus and Denisovans”, the scenery has changed, has become more serene, moving into that trademark ambient-like Sendelica Spacey Sound while the guitars and the drum beats are quite experimental, this is a Spacey electronic experiment though towards the end the scenery becomes even more Spacey and quite darker! “Neanderthal and Homo Sapien” occupies Side Three, the dominant cool Sax sound makes the soundscape dreamy flirting with New Age Jazz, quite relaxing and trippy while the second part of the track becomes more adventurously spacey emerging again that unique Sendelica-Hawkwind-ized feel! “Future Man – Homo Superior” closes Side Four, Sendelica makes a huge dive into the infinite SPACE, a superb futuristic slow Space Rock theme with lots of hallucinogenic vibes in the air, a sonic journey to the Stars, this is my personal highlight of the album, I could be listening to this for hours and hours without getting bored, just tripping with my mind in other Galaxies…

Get it via SENDELICA Bandcamp

Get it via FRUITS DE MER RECORDS Web