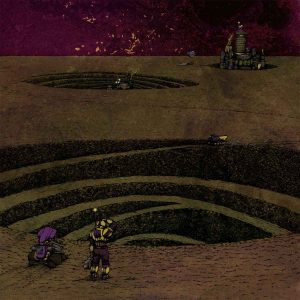 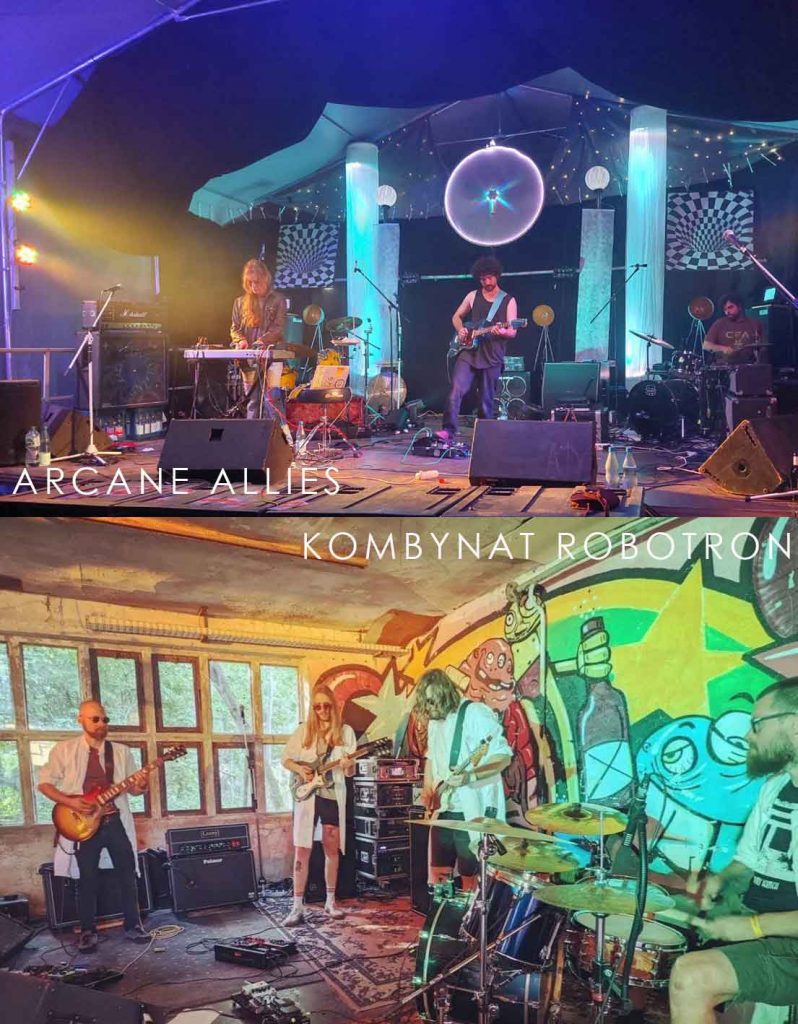 The distance between Kiel and Berlin is 389,2 KLM. Driving through the A24 autobahn you will need around 4 hours and 13 minutes to get there. Of course, there is a much shorter way! You see, this Vinyl Split release actually annihilates the mighty distances! Kombynat Robotron is an improvised freak-out krautrock band from Kiel and Arcane Allies is an ambient synth Space-Kraut band from Berlin… Got it? … Three record labels worked together for this release, Acid Test, Pink Tank, and Little Cloud Records. The press release states:

“Some things in life are just meant to go together  – like Rhubarb and Custard or Jones and Clarke (LUFC) – add to that list two bands hailing from Germany – Arcane Allies and Kombynat Robotron. As they prepare for a joint tour this is starting NOW – here comes the perfect addition – an LP featuring Arcane Allies on one side and Kombynat Robotron on the other.
ARCANE ALLIES is a Synth Trio (Theremin/Synth, Drums and Guitar) formed in 2016. Inspired by Psychedelic and Krautrock Bands such as Can, Neu!, Tangerine Dream and Moon Duo but also Electronic and Techno Acts such as Derrick May, Jeff Mills or Jessy Lanza and Laurel Halo from the HyperDub Label. On the Arcane Allies side you are presented with Alut – A and Alut – B with Nactschwefel just acting as meditative ambient breather between both these tracks. Alut – A and Alut – B really fly off into the cosmos. With a new LP (Sun Ra Oscillations) at the pressing plant (Acid Test/Pink Cloud) this should act as the perfect primer for those new to Arcane Allies.
Kombynat Robotron we feel need no introduction (having long sold out their last release on Acid Test) and becoming one of the leading names in the German Psychedelic Underground. With releases on many labels across many countries we are so pleased we can be involved again on this collaborative LP. For those in the know prepare yourselves again to strap into the Kombynat Robotron acidic groove as they build up a motorik chug of fuzz bliss that builds into sending superlative chills up and down your spine and into your brain to unleash waves of dopamine into your pleasure receptors – it’s a beautiful feeling they can generate”…

So, the Arcane Allies side contains 3 tracks. “Akut A” is a deeply Spacey-effected electro-synthesized tune with a tremendous Space-a-delic rhythm, acting like a wild colorful roller coaster in Space. The whole Space scenery is somehow interrupted by “Nachtschwefel” moving into an abstract ambient electro-spacey environment and after 4:46 minutes, “Akut B” continues from just where “Akut A” stopped, there’s a distinctive mind-expanding sequencer that along with the spacey effects gives an intense Kosmisch-Kraut feel, wonderful…

The Kombynat Robotron side contains just 2 tracks. “Mantel” is improvised Space Rock, with a Krauty attitude and a super Spaceylicious rhythm beat, leading to a fascinating journey beyond, the moon… “Kern” with its killer bass intro, moves into heavy Space Rock, dynamic, full of energy, and loads of Space Fuzz… So, cool! The Space-Mind journey is guaranteed, so… Invest… TimeLord Michalis

Get it from ARCANE ALLIES Bandcamp