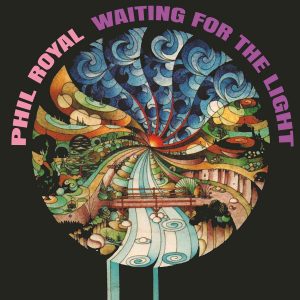 “Waiting For The Light” is the fruit/produce of a very interesting collaboration between Icarus Peel (a well-known musician/artist to TimeMaZine readers) and an unknown (at least to me) guy, named Phil Royal. This is a small piece of the very interesting information that I pumped from Phil’s web, “Phil Royal is a citizen of Liverpool, Ireland, London, Lincolnshire, France, Devon, and Scotland. In his years on the planet, Phil has experienced a number of different lifestyles and locations – some idyllic and others rather less so! Now resident in Kintyre, a beautiful part of Scotland, life for Phil began in the famous football, music, and comedy port of Liverpool – the centre of the universe in the 1960s. In between the two he has variously lived in all the above places for different time spans. Workwise Phil abandoned a fledgling career in law to join the staff of the Labour Party, moving on shortly after the 1997 landslide and transitioning to a very successful Public Affairs career. He now runs his own small PA consultancy and retains a very active interest in politics”.

As far as the “musical” part of Phil’s story, let’s have a look/read at Billywitch (Mega Dodo) Records press:

“In a land long ago, the teenage Phil Royal was inspired to leave home and join the hippy movement. Many years later, he wrote down his most memorable experiences and his reflections on them. This extraordinary personal account came to the attention of the musical wizard Icarus Peel and this new album ‘Waiting for the Light’ is the result of their collaboration.
If you are at all offended by references to recreational drug use or criticism of organized religion then this album is not for you!
The joys and hopes of those times are refreshing but Phil also faces the pains and fears unflinchingly and his later reflections on what can only be described as supernatural experiences are full of insight. This is truth, there is no mythology!
Anybody who lived through those times or still living that dream will find much they can relate to and for those fascinated by the period, this will be an invaluable source.
Brilliant arrangements by Icarus Peel and playing by the full band will delight the ear of many who just want to enjoy a damn good album!
Never before has the reality of the early hippy movement been told with such clarity.  This is a unique album that will live far beyond its release”…

Of course, Icarus brought the whole “gang” together so “Waiting For The Light” could take flesh and cones, and become alive.

So, it’s Phil Royal on spoken word, Icarus Peel on vocals and most of the instrumentation, Crystal Jacqueline on vocals, Mordecai Smyth on mellotron, and electric piano, Jay Robertson on drums, Andy Budge on bass (on “Other Voices” and “Heaven and Hell”), Nigel Wayne on sax, and The Crystal Sisters on backing vocals. All songs of “Waiting For The Light” are written by Phil Royal and Icarus Peel.

“Waiting For The Light” consists of 17 tracks, some dressed with music, some not. The album takes off with the short (0:36sec) folkie spoken intro “Innocence”, sooner to leave its place to “Road Of Glory”, a track sung by Icarus… Imagine the 60s, imagine Phil Spector’s Wall Of Sound… and now bring to mind a studio rehearsal where everybody is under the influence of hallucinogens… This is exactly the main frame of this song, a beautiful and trippy Pop-a-delic tune! The next one, “Acid”, uses the same atmosphere, at the same rehearsal, but now a new participant is being welcomed, Hendrix and his magical wah-wah’s, incredible sonic atmos is being created under the influence of Phil and Icarus, acting as a psych-duet making this track a piece of Acid-Pop brilliance! “Flung” starts with an acoustic guitar and some magical flute as Phil recites his memories from the hallucinogenic past days, a track that ends creating a mood of an acidly drenched fairy tale… On “Kiss”, Phil, Icarus, and Crystal are magically sharing the vocals, the music is dreamy and electrically psychedelic, emerging a strong feeling of 60s nostalgia… “Bridge Street” is sung by Icarus, this is a song about Acid & Hash, there’s a funky rhythm with a superb groovylicious feeling and a rather “tasty” sax! … “We spent our cash on acid and hash”… “Wild Rhythms” is a spoken-word track by Phil under an adventurous psychedelic and kind of amazing tribal drumming… On the self-titled “Waiting For The Light”, Phil recites some of his psychedelic surrealistic poetry, the music is psychedelically trippy, it follows Phil’s voice and also fills the place with a feeling of euphoria… “Hippy”, despite its title, starts as a late 50s dreamy Doo Wap tune with lots of interruptions, a weird dialogue between Crystal and Phil, while the Sax is somewhere else (probably with Zappa, I can swear I heard Uncle somewhere in there), this is a strangely loving tune, indeed! “Mum And Dad” is a short spoken intro that acts as the introduction for the next one called “More Trouble”, by now the rehearsal room is under occupation, there’s some entity here among the other musicians… This is an eerie and strangely psych-constructed track, getting darker, going deeper to PSYCH, love it! “We Play” uses a naughty trippy Sax sound with vocals by Crystal, another cool track! The short “Regrets” is an acoustic kind of balladesque tune with Icarus on vocals while “Keith” is a cool “Rocker” using Phil’s spoken words… On “Heaven And Hell”, Phil tells one of his stories under a mysteriously creepy psych-a-strange soundscape with an adventurously chaotic background, wow! The album, eventually comes to an end, with two short kinds of interludes, “Innocence Redux” and “Calling Time”, closing the album in a rather weird, psychedelic, and experimental way… “Waiting For The Light” is a fantastic musical concept, an extraordinary colorful journey to time… Exceptional!   TimeLord Michalis